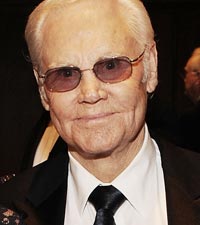 A monument dedicated to country music legend George Jones was unveiled today (11-18-13) in Nashville at the Woodlawn Roesch-Patton Funeral Home and Memorial Park at 660 Thompson Lane in the Berry Hill portion of southern Nashville. The event was open to the public, and also included a special presentation by George Jones’ widow Nancy Jones announcing the establishment of a scholarship fund for Middle Tennessee State University (MTSU) on behalf of George. George Jones died on April 26th, 2013.

The monument features a tall arch made in the likeness of a guitar fretboard that reads “Jones” at the very top, with a large mantle across the face of the monument that reads “He Stopped Loving Her Today” in tribute to one of Jones’ signature songs. On the left of the monument is an image and eulogy to George Jones, while the right of the monument is reserved for his wife Nancy. In the center is a guitar with a placard with George’s most-famous nickname, “The Possum.”

The monument was first announced in June to honor George Jones’ “life and contributions to country music.” Initially there was a plaque in the place where the new monument sits with an artistic rendering of the monument and the note, “Thank you for all your love and support shown to George and to me. God bless, Nancy.”

The unveiling comes days before a star-studded tribute to George Jones that is set to transpire on Nov. 22nd in Nashville at the Bridgestone Arena called “Playing Possum, The Final No Show” with over 70+ performers scheduled to appear.

Photo is from Chris Cannon of NBC 5 in Nashville. 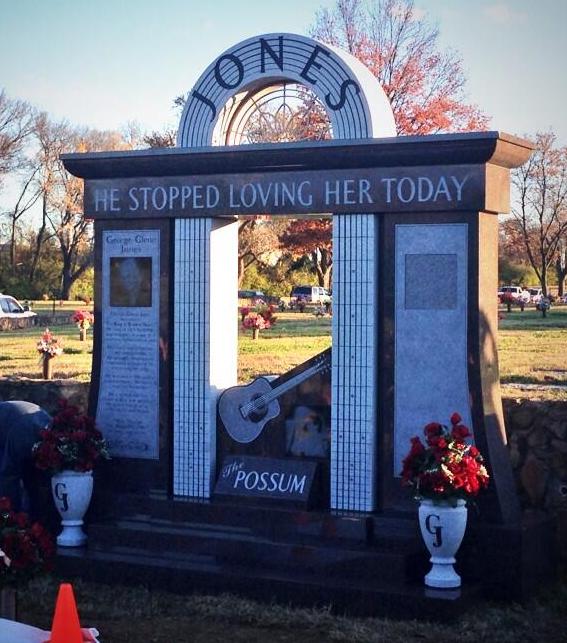