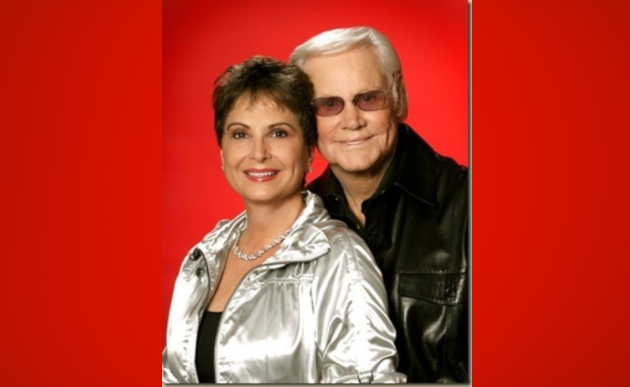 The mural was unveiled earlier this week, and was painted by Nashville artist Shawn Catz along with help from local musicians. Instead of being a more accurate portrayal of the Possum, the mural takes its inspiration from the Mike Judge animated series “Tales From The Tour Bus” and the George Jones episode that aired in 2017. Catz and Colonial Liquors say they secured permission from Mike Judge and Cinemax before painting the mural, and also got the blessing of the George Jones Museum on Lower Broadway. However George’s widow Nancy is having none of it.

“Have you seen that thing?? It is plumb ugly!” was Nancy Jones’s response when she was asked to comment on it. “It doesn’t look anything like George. It is stupid, hideous, self-serving, NOT accurate and certainly not sanctioned by the estate or the museum. George was a great writer, a great singer, and a proper mural should be about him and his music, not a mischaracterization of him on a lawnmower!”

The lawn mover incident is probably the most notorious story about George Jones, but many don’t know is that George Jones chose this slow-moving mode of transportation to procure alcohol more than once.

The first and most well-documented lawnmower incident was the late 60’s. George Jones was living 8 miles outside of Beaumont, TX with his then wife Shirley Ann Corley. Jones had experienced a few #1 hits by that time, and his success fueled his wayward ways with alcohol. He was drinking so bad, his wife Shirley resorted to hiding all the keys to the vehicles before she would leave the house so George wouldn’t drive to the nearest liquor store in Beaumont.

But that didn’t stop him. After tearing the house apart looking for a set of keys one time, George looked out the window to see the riding lawnmower. “There, gleaming in the glow, was that ten-horsepower rotary engine under a seat. A key glistening in the ignition,” George recalled in his autobiography. “I imagine the top speed for that old mower was five miles per hour. It might have taken an hour and a half or more for me to get to the liquor store, but get there I did.”

The second incident happened when he was married to Tammy Wynette. Taking a cue from George’s previous wife Shirley, Tammy hid all the keys from George, but Wynette woke up one night at 1 a.m. one night to find George missing. “I got into the car and drove to the nearest bar 10 miles away,” Tammy recounted in 1979. “When I pulled into the parking lot there sat our rider-mower right by the entrance. He’d driven that mower right down a main highway. He looked up and saw me and said, ‘Well, fellas, here she is now. My little wife, I told you she’d come after me.’”

The George Jones lawnmower incidents later went on to be memorialized in many country videos, including Hank Williams Jr.’s “All My Rowdy Friends Are Coming Over Tonight,” Vince Gill’s 1993 hit “One More Last Chance”  that includes the line, “She might have took my car keys, but she forgot about my old John Deere,” John Rich’s “Country Done Come to Town,” and George’s own “Honky Tonk Song.”

Nancy Jones and the George Jones Museum received their own criticism for affiliating George Jones with alcohol when they launched a George Jones brand of Moonshine. Nancy said at the time, “He’d say the alcohol controlled him all his life, and now he’s controlling it.”

George Jones’s daughter Georgette had a different take. “Trying so hard to remain silent but I can’t…” she said at the time. “I’m sorry but I hope other people can see the truth. Dad is rolling in his grave over this! Anyone who truly knew him would know how much he would hate this!”

George Jones had a notorious drinking problem throughout his career. At one point in 1979, despite being one of the best-selling artists in country music history, Jones was bankrupt and destitute, living in his car, and weighed around 100 pounds. George spent time in mental institutions tied to his drinking multiple times and had to be straitjacketed on numerous occasions. He became known as “No Show Jones” because he missed so many engagements over his career.

Waylon Jennings and others first helped get George Jones sober in the early 80’s, and the result was a resurgence in his career. However later in life George Jones would fall back into his old habits. George gave up drinking and drugs for good in 1999 after wrecking his car and spending two weeks in the hospital. He passed away in 2013.