George Michael Is Gone, But His Butt Will Prevail and Outlive Us All 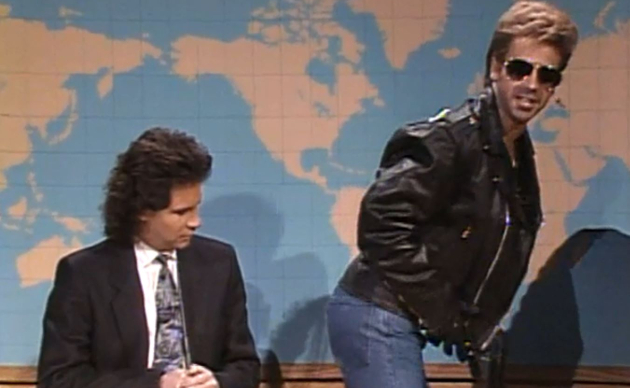 “Resist, and die. Surrender, and live eternally. My butt will prevail! It will outlive us all! For I have achieved perfect butt-ness!” — Dana Carvey spoofing George Michael, Saturday Night Live 1989

Laugh off George Michael and his butt all you want, but just think about what he achieved with his debut record Faith. The album spawned six Top 5 singles, including three #1’s. Maybe that doesn’t impress you if you only regard George Michael as a fluffy, superfluous, expendable pop star that was nothing more than a maleable product of the record industry. But when you consider he wrote all of those songs by himself, and had a total of one song with a co-writer on the entire Faith album, while also producing the entire record by himself, this was and is uncharted territory for a pop star achieving that caliber of success, or really for any musical artist no matter what the genre, or what era.

Taylor Swift had a similar record with Speak Now where she wrote and produced it herself, but it didn’t achieve nearly the universal acceptance of Faith. George Michael and Faith were music in 1988. Period. The album has now sold more than 25 million copies worldwide. And most who say they didn’t find any of thw blockbuster songs on that album fetching, or at least a guilty pleasure, are lying through their teeth. Go listen to “One More Try” and tell me there isn’t something there.

And for those who profess that it takes an army of songwriters, producers, programmers, and samples to make a hit record, let’s hold up George Michael’s Faith as a prime example of why that mentality is folly, and the downfall of modern American anticlimactic pop music.

But where was George Michael in early 1989 when it came time to accept the Grammy for Album of the Year for Faith? He was a no show—struggling to come to grips with becoming an international pop star from some cheesy songs, and wanting to distance from certain efforts he expended promoting the album. George Michael actually wanted to do something with the bully pulpit he found placed at his feet. This eventually put him at polarizing odds with the same industry that had crowned him king, and George Michael would never achieve the same level of success or attention that Faith delivered.

George Michael’s next album Living Without Prejudice Vol. 1 was a total departure from the image-driven and commercial rollout of Faith, and Michael refused to cut any videos for it, or participate in any promotion of it. He wanted people to take him seriously as a songwriter—something they probably should have done with Faith, but “I Want Your Sex” and the image-driven posturing got in the way of the general populous realizing just what an achievement of independent resolve Faith had been.

That’s why it was just about perfect and prescient when Saturday Night Live’s Dana Carvey decided to spoof George Michael and his butt when Michel’s name was heavy in the zeitgeist after not showing up to accept his Grammy.

Though the Saturday Night Live skit might be lost in time, George Michael’s butt wasn’t. There’s even a Facebook page for it, which posted on Sunday, “This page was made out of love and good-natured appreciation of our favorite musician. So sorry for this loss, may we celebrate his memory for years to come and keep his music bumping. Sending love to his family.”

Just like his butt, there’s some strange perfect-ness to George Michael passing away on Christmas—a holiday he celebrated in song better than most modern artists. And isn’t it poetic that he would die in 2016—a year that seems to be reserved for the passing of many of those musical and cultural misanthropes inevitably alienated from a world that misunderstands their contributions, and the motivations behind them.