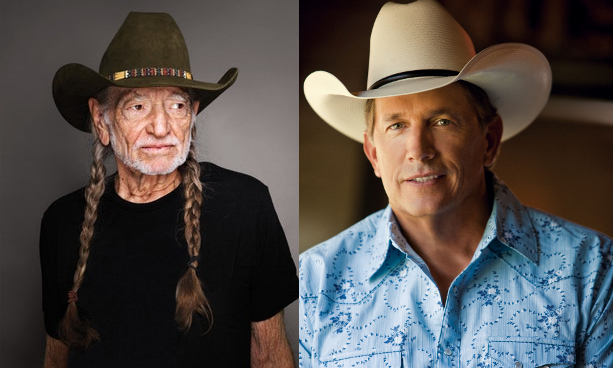 It’s both weird that fellow Texans and country legends Willie Nelson and George Strait have never collaborated together or even performed side by side in their illustrious careers, and yet it also makes perfect sense. Where Willie has always been the cowboy hippie, walking around in Indian braids with a bandana, and smelling like Thai stick, George Strait is straight laced as they come, with his Wrangler jeans and shirt expertly starched, and not an inch of crookedness in the lay of his Stetson.

But it was bound to happen eventually that the two would sing together, and the occasion of this weekend’s big Willie Nelson tribute show in Nashville at the Bridgestone Arena (1-12) sponsored by Blackbird Presents made for the perfect excuse. The two took the stage together near the end of the 4-hour presentation to sing a new song they co-wrote together, along with George’s son Bubba Strait, and producer Buddy Cannon contributing. Called “Sing One With Willie,” it will be on George Strait’s new album Honky Tonk Time Machine, and made for the perfect night cap to the tribute show.

I’ve had a wonderful career, but I think it’s quite clear
So I’m writing this down in a song…

…George Strait started out, with an All-Star band behind the duo, including Jamey Johnson on guitar, and Amanda Shires on fiddle. The chorus goes…

Later Willie sings an answer verse (see video below). Some of the lyrics are hard to make out, but we’ll get to hear the studio version once Honky Tonk Time Machine sees the light of day. The entire Willie Nelson tribute was also taped for future airing on A&E some time later this year. After “Sing One With Willie,” George Strait and Willie also sang “Good Hearted Woman” together.

Also performing on the night were Chris Stapleton, Lee Ann Womack, Margo Price, Sturgill Simpson, Ray Benson, The Avett Brothers, Eric Church, and others. You can see the full set list below.