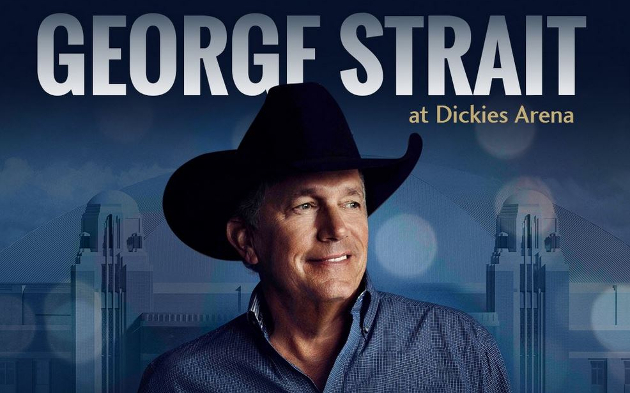 Does Ft. Worth ever cross your mind?

Well if it does and you want a chance to see George Strait, you now will have your opportunity as the modern King of Country has committed to playing Cowtown in a rare, one-of-a-kind performance. Though Strait officially retired from touring full-time in 2014, capping off his “Cowboy Rides Away” tour in nearby Arlington, TX at AT&T Stadium in front of over 100,000 people, he does play the occasional show still now and then, including limited run residencies in Las Vegas, and a recently-announced show March 30th, 2019 in Atlanta at the Mercedes-Benz Stadium with Chris Stapleton, Chris Janson, and Ashley McBride.

Now it’s been revealed that George Strait will be helping to open a new venue in Ft. Worth, TX when he headlines the Dickie’s Arena to be located on the Will Rogers Memorial Center campus on November 22nd, 2019. The brand new, $540 million-dollar arena started in November 2017 is said to have a seating capacity of 14,000, and though the area will be used for sporting events and other functions, Matt Homan, president and general manager of the venue, called it the “first concert announcement at Dickie’s Arena,” meaning the George Strait performance will be one of many musical events to happen at the new facility. Asleep At The Wheel will open the show.

Tickets for the show will start at $19.82, to commemorate the first time George Strait ever played Ft. Worth in 1982, performing at the legendary Billy Bob’s Texas right down the street from the new venue. But you can spend upwards of $250 for the most primo seats where you can smell the starch in George’s jeans. Tickets will be put on sale to the general public on December 7th via TicketBastard.

This won’t be the first time George Strait has helped open a new arena. His Las Vegas residencies in April of 2016 helped commission the Las Vegas Arena (now T-Mobile Arena). Below is a bunch of Ft. Worth people poorly/awkwardly singing “Does Ft. Worth Ever Cross Your Mind” for what it’s worth.