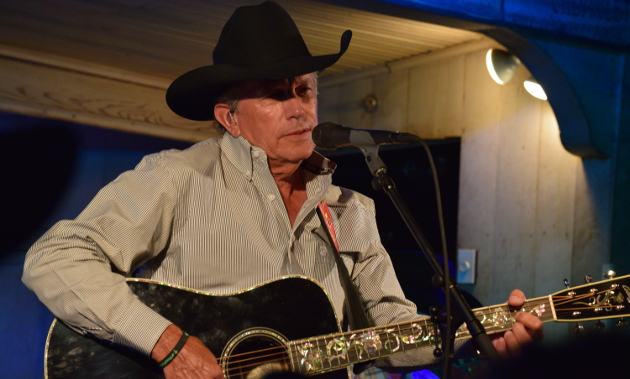 If “Tennessee Whiskey” wasn’t a country music standard before, it is now. Written by Dean Dillon and Linda Hargrove, it was first recorded by David Allan Coe for his 1980 album of the same name, and released as a single. Unfortunately for Coe, the song didn’t go that far at the time, faltering at #77 on the country charts. It wasn’t until George Jones did the song in 1983 that it finally found success. At the time Coe and Jones shared the same producer in Billy Sherrill. The George Jones version of the song reached #2 on the country charts, and a country hit was born.

But that wasn’t before another country star passed on the song, regrettably. In a recent interview with Kacey Musgraves on Facebook Live ahead of her opening for George Strait in Las Vegas, Strait said “Tennessee Whiskey” was one of the songs he most regrets punting on when it was first pitched to him early in his career.

“There was a couple, but the biggest one was probably ‘Tennessee Whiskey’ that Dean Dillon wrote, and I think it’s up for Song of the Year this year at the ACM’s,” says Strait. The Chris Stapleton version from his 2015 album Traveller is an ACM Song of the Year contender after it shot to #1 when Stapleton performed it on the CMA’s with Justin Timberlake.

“Dean pitched me to that in the 80’s … and I missed it,” George Strait continues. “It was a record for … George Jones cut it. A lot of people cut that record. Chris Stapleton just nailed it.”

As long-time George Strait fans know, “Tennessee Whiskey” co-writer Dean Dillon has been one of George Strait’s go-to songwriters throughout his career and has written more than 50 of Strait’s tunes. The two names are virtually synonymous with each other in songwriting circles.

“There’s only been one album that I’ve done that he didn’t have a cut on,” Strait explained to Musgraves. “The reason he didn’t have a cut on that album is because he brought me this song in the studio some friends of him had written called ‘Baby’s Gotten Good At Goodbye.’ I was actually working on a Dean Dillon song and I heard this song, so I went in and cut it, and it bumped his off the record. So it’s his fault (laughing).”

“Baby’s Gotten Good At Goodbye” written by Tony and Troy Martin also became a #1, so that wasn’t a terrible choice by Strait. Meanwhile “Tennessee Whiskey”—a song first released some 37 years ago and re-recorded numerous times—continues to be one of the most important and resonant songs in country music today. We’ll see if they’re saying that about Florida Georgia Line’s “Cruise” in 2054.