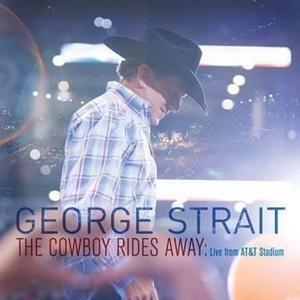 Though we’re still only a few months removed from George Strait’s final show as a touring performer, it’s pretty safe to say that the record breaking concert will go down as one of the biggest concert events in the history of country music, especially for an event centered around a single performer. From shattering the indoor attendance record, to all the special guests, to the circular stage, to the songs and performances themselves, country music may never top what happened on June 7th, 2014 as a farewell to a legendary country performer.

When it came to how the show would be sold to those who couldn’t attend, we knew to anticipate that commercial interests would be considered heavily in the deal. When a selection of the performances from the concert were broadcast via CMT on August 29th, it was no surprise there was a heavy dose of Jason Aldean, Sheryl Crow, and other performers that could attract eyeballs to the broadcast, even though they would also attract the ire of some of George Strait’s traditional country fans. And the same could be expected for the album The Cowboy Rides Away: Live from At&T Stadium when it was released on September 16th.

But what nobody could anticipate is that a George Strait album would be the vehicle for the most excessive, and most blatantly obvious use of the pitch correction software known as Auto-Tune that I have ever, ever heard in the history of recorded music, barring projects purposefully using Auto-Tune as a special effect. The use of Auto-Tune on The Cowboy Rides Away is egregious, and embarrassingly obvious to the point where I can’t believe that a project like this would ever be released for public consumption, especially when such a legendary performer, and such a legendary event, are involved. This is outrageous. It is an abomination. And whomever is responsible for mixing in and mastering this Auto-Tune hatchet job should be marched into someone’s office, forced to listen to King George’s masterful vocals getting transmogrified by 1’s and 0’s like lambs to the slaughter, and then be unceremoniously fired. Then a new version of The Cowboy Rides Away sans the Auto-Tune should be offered to anyone who spent good money on this album. And all this should be done posthaste.

What the hell were they thinking? Who approved this? Who believed that they could slather such excessive Auto-Tune on this project, and people simply wouldn’t notice?

Beyond the deceit that the use of Auto-Tune presents in itself, it is especially difficult to employ in this particular context where you have a live performance, and a performer who doesn’t use Auto-Tune on a regular basis. George Strait sings at times with a cadence that Auto-Tune can’t keep up with. Many times he purposefully sings by beginning a note out-of-tune to eventually bend it back into place in an attempt to squeeze the emotion out of a lyric. This is called “Twang,” and is a critical part of the George Strait experience that someone in a studio decided to destroy because of some silly notion that George Strait’s singing must be perfect. Performers who regularly sing with the aid of Auto-Tune like Rascal Flatts, they know what to do to make sure to not send the program into overdrive. When you add Auto-Tune on to a live performance after the fact, it almost always results in obvious artificial electronic sounds that erode the authenticity of the listening experience.

Auto-Tune was never meant to be used in the way it was used on The Cowboy Rides Away. As audio engineers will tell you, “Everyone in Nashville uses Auto-Tune,” and to an extent, this is probably true in the studio. But the point of Auto-Tune originally was to take errant notes here and there in an otherwise excellent vocal performance, and fix them slightly and harmlessly so an entire new vocal take wasn’t necessary. It was a tool, not a crutch. Almost immediately of course, artists like Cher, and eventually T-Pain began to use it as a vocal enhancement. But when it is administered en masse as it is on this album, the result is something much worse than what a few missed notes would ever sound like. No care, no love was put in the vocals on this album and how the Auto-Tune was administered. Even if some Auto-Tune correction was decided to be used here and there, to the extent it was used on this album is an insult to the listener’s ears.

Veteran producer Chuck Ainlay is given credit as a producer on The Cowboy Rides Away: Live from At&T Stadium. So is George Strait. I have no idea if George Strait had any say so with what happened with this album and the Auto-Tune or not. But even if George Strait himself doesn’t have a problem with it, many fans do. And those fans should demand either their money back, or an unadulterated version of this album. Because this artist, and this concert were too important to mar in such an unnecessary manner.