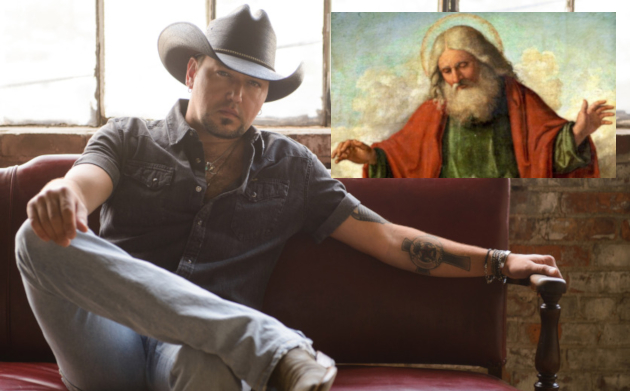 Pop country artist Jason Aldean was scheduled to take the stage at the Country Stampede Festival in Topeka, Kansas Saturday night (6-22) as the 3-day event’s 2019 top headliner act. But God was having none of it. Saturday afternoon saw strong storms roll into the area right as Morgan Wallen and his atomic mullet were finishing up their set, sending fans scurrying for cover as rain and dangerous lightning moved in, suspending the festivities. Organizers were still hoping that Jason Aldean could take the stage after a delayed start time, but God was persistent, and the weather never subsided.

“It wasn’t getting any better,” Jason Aldean said to fans in an Instagram post. “We looked at the radar, and there was still hours of the stuff left to go. We put it off as long as we could, hoping that we would have a break in it enough to play our show for you guys, but it just wasn’t gonna happen. I apologize, we always hate to do that, it’s a last resort. It’s never what we want to happen. We were here ready to party with you guys. I hate it went down like that.”

The performance still could have gone forward in light or even moderate rain, but lightning made any further performances a safety hazard. Organizers held out hope all the way until midnight that Jason Aldean could take the stage before canceling the performance altogether.

In May, Country Stampede announced it was relocating from the Tuttle Creek State Park in Manhattan, Kansas where it had been held for the last 23 years to the Heartland Motorsports Park in Topeka, Kansas 1 1/2 hours away, partially due to flooding concerns with the previous site. Friday of the festival also saw issues due to weather.

God, a well-known traditional country fan, could not be reached for comment.