Gone is One of Country Music’s Most Beloved Grandmas 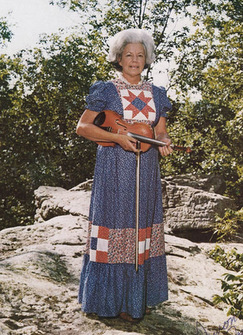 Old-time fiddler, mandolin and guitar player, and personality of Hee-Haw Ramona Jones has died. The long-time singing partner and comedic foil to Grandpa Jones passed away Tuesday, November 17th in Goodlettsville, TN, just north of Nashville. The two were married for 52 years until Grandpa Jones passed away in 1998. She later remarried and took the name of her second husband, Reverend W. Eugene Gober. Ramona was 91-years-old.

Born Ramona Riggins in Van Buren, Indiana, she learned how to play fiddle from her father, and was a self-taught multi-instrumentalist from a young age. By the time she reached high school, she was performing in music competitions. She met Louis Marshall “Grandpa” Jones after he returned from fighting in World War II while the two were working at the WLW radio station in Cincinnati. They decided to become a duo and moved to Nashville in 1947 to perform on the Grand Ole Opry, and later traveled all over the country and world to entertain people, including overseas to perform for service members from Italy to Korea.

Especially versed in the mountain-style of singing and fiddling, Ramona Jones may have been best known from her affiliation with her Grand Ole Opry member and Country Music Hall of Fame husband, but was quite the accomplished solo artist herself, releasing multiple albums including her 1974 debut Back Porch Fiddlin’ Vol. 1, and also wrote original songs such as “Old Troup Dog.” With Grandpa Jones, the duo contributed many notable compositions and duets to the country music canon, including “Dark as a Dungeon” and “Don’t Sell Daddy Any More Whiskey.”

Ramona Jones’ most recognizable contributions might have been as a regular on the long-running syndicated variety show Hee-Haw. Appearing as a performer beside Grandpa Jones, or sometimes in comedy sketches as Jones’ straight man (or woman), she became one of country music’s most beloved grandmas over the quarter century run of the show beginning in 1969. One of their most popular routines is when they would take tuned cowbells and play the melodies to well-known songs.