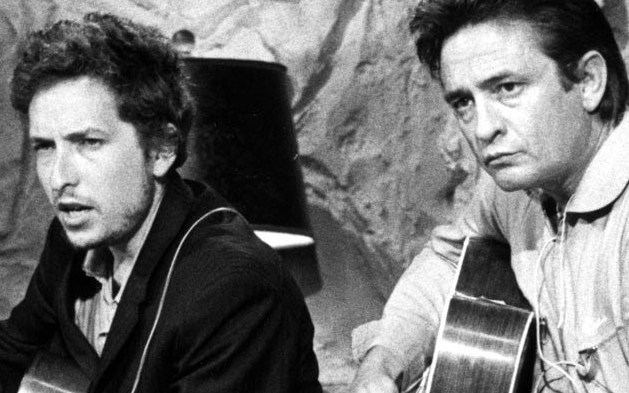 The Country Music Hall of Fame and Museum in Nashville, TN has announced what will be their next major two-year exhibit to replace the current Bakersfield Sound exhibit in the museum’s largest revolving exhibit space. It will be called Dylan, Cash, & The Nashville Cats, and it will primarily focus on folk songwriting icon Bob Dylan, Country Music Hall of Famer and Legend Johnny Cash, and the “Nashville Cats,” which include many of Nashville’s unheralded studio musicians from the late 60’s, early 70’s era.

The exhibit will take on a The Johnny Cash Show vibe—the Cash-hosted prime time television show where Johnny Cash famously collaborated with Bob Dylan on stage. Cash later appeared on Dylan’s landmark Nashville Skyline album which opened up Music City to an entirely new generation of musicians and songwriters. The exhibit is scheduled to open up on March 27th, 2015 for a proposed two-year run.

“Nashville has always been a more nuanced music center than it commonly gets credit for,” says museum director Kyle Young. “And the same thing could be said for the Country Music Hall of Fame and Museum. We strive to tell the full story of country music’s evolving history using a mix of provocative learning experiences, and this exhibit is a great opportunity to talk about the early confluence of country and rock. Dylan recorded Blonde on Blonde, John Wesley Harding, and Nashville Skyline here. The Byrds made Sweetheart of the Rodeo, Neil Young recorded Harvest, and the Nitty Gritty Dirt Band created Will the Circle Be Unbroken. Albums like these had a profound influence on popular music as well as establishing Nashville as a music hub and cool southern city with a sense of place.”

Here is how the Country Music Hall of Fame breaks down what people can expect from this three-pronged exhibit:

Bob Dylan
While recording his album Highway 61 Revisited in 1965, Dylan was in New York working with producer Bob Johnston, a former Nashville resident who hired multi-instrumentalist Charlie McCoy to lead sessions in Nashville. McCoy attended one of Dylan’s New York sessions and was invited to play guitar on “Desolation Row.”

Taken with McCoy’s musicianship, Dylan was encouraged by Johnston to record in Nashville where there were other musicians as skilled as McCoy. Dylan took Johnston’s advice and arrived in Nashville in 1966 to make Blonde on Blonde, one of the great achievements of Dylan’s long career and a benchmark of American popular music. Dylan returned to Nashville to record John Wesley Harding, Nashville Skyline, and portions of Self Portrait.

Johnny Cash
Having met several years before, and having cemented their friendship at the 1964 Newport Folk Festival, Dylan and Johnny Cash were reunited in Nashville, in February 1969. Dylan already had recorded most of Nashville Skyline when he and Cash went into the studio. They cut more than a dozen duets in two days. “Girl from the North Country” appeared on Nashville Skyline, and Cash wrote Grammy-winning liner notes for the album.
Later that same year, Cash began hosting a weekly show for ABC. The Johnny Cash Show was shot at Nashville’s Ryman Auditorium and became an outlet through which country artists and folk, pop and rock musicians could reach new audiences. Dylan and Joni Mitchell were guests on the first show, and Ronstadt, James Taylor, Young, Lightfoot and Eric Clapton’s Derek & the Dominos appeared on subsequent shows.

Nashville Cats
Many artists who followed Dylan’s lead and made the pilgrimage to Nashville to record or appear on Cash’s show were rewarded with the opportunity to work with world-class musicians. In several cases, the experiment yielded some of the artists’ most successful or influential albums, thanks to the accomplished players drawn from a core group of Nashville studio musicians including David Briggs, Kenny Buttrey, Fred Carter Jr., Charlie Daniels, Pete Drake, Mac Gayden, Lloyd Green, Ben Keith, Grady Martin, Charlie McCoy, Wayne Moss, Weldon Myrick, Norbert Putnam, Jerry Reed, Pig Robbins, and Buddy Spicher, among others.

In the political climate of the era, Nashville’s mainstream country recordings were perceived as the music of the conservative South, overtly slick and commercial. In stark contrast were the folk-oriented, politically charged songs coming from Baez, Buffy Sainte-Marie and other left-leaning artists who looked past their differences to work with Nashville’s accomplished musicians.
This is not primarily a story of cultural or political divisions, but rather of people coming together from very different backgrounds and moving past perceived divisions to find common ground through music.

Dylan, Cash, and the Nashville Cats opens March 27, 2015, and runs through December 31, 2016. It will be accompanied by a series of educational programs, including live performances, panel discussions, films, instrument demonstrations and more. The exhibition will follow the nearly three-year run of The Bakersfield Sound: Buck Owens, Merle Haggard, and California Country, which closes December 31.