Hank Williams Arrested: The Story Behind the Famous Photo 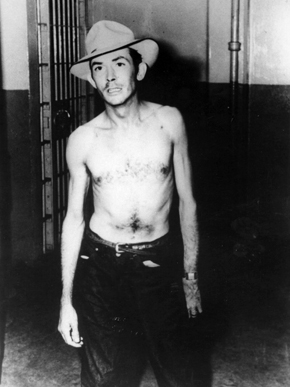 63 years ago, the famous photo of Hank Williams leaving a jail cell in Alexander City, Alabama was snapped.

It was August of 1952, and the life of Hank Williams was in a downward spiral. The Hillbilly Shakespeare already suffered from chronic back pain which helped lead to his notorious alcoholism, and then earlier in 1952, Hank suffered a fall during a hunting trip in Tennessee, facilitating his use of painkillers such as morphine. On August 11th, 1952, Hank’s alcoholism and drug use resulted in the singer and songwriter being fired from the Grand Ole Opry, which devastated him and only exacerbated his personal issues.

On August 17th, 1952, six days after being fired from the Opry, Hank Williams was back in his home state of Alabama in a town called Alexander City, also known as “Alex City” by locals. Williams frequently visited the area, especially Lake Martin which borders the town to the south and east, and where Hank owned a lakeside cabin. Hank Williams sometimes conducted interviews with local Alexander City DJ Bob McKinnon when he was in town. One of the communities surrounding the lake was known as Kowliga, which inspired the Hank Williams hit “Kaw-Liga.” The name is derived from a legendary Indian from the area, and a wooden statue commemorating Kaw-Liga (or Kowliga) that was located near the lake.

It was during the same trip to Alexander City and Lake Martin in 1952 that some reports say Hank would write the song “Kaw-Liga.” He recording the hit on September 23, 1952 at the Castle Studio in Nashville with a B-side of “Your Cheatin’ Heart.” Other reports say he wrote the song in 1951 because of a demo version that is attributed to a year before. But either way, Hank would not live to see the song’s release. His life would continue its tragic, downward spiral, illustrated by the events of August 17th.

At 11:25 p.m., Hank Williams was arrested in Alexander City at the Russell Hotel for public drunkenness and disorderly conduct. Chief Winfred Patterson who arrested Hank said to the Alabama Journal in 1971 that Hank was “more or less having DT’s (delirium tremens). He was running up and down the hall, yelling that someone was whipping old ladies and he was going to stop them.”

According to reports, Hank’s friend Darwin Dobbs, who had hosted Hank at his Lake Martin fishing lodge, posted Hank’s $25 bond, and paid the $10 fine for Hank to be released. As the singer was exiting the jail, the famous picture of a shirtless, gaunt, and unshaved Hank Williams was snapped.

Shortly thereafter, Hank arrived at his mother’s house in Montgomery, and later ended up spending time in the St. Jude’s Hospital trying to regain control of his life. According to biographer Colin Escott, the stay “must have helped Hank a little,” because he made an appearance on the Louisiana Hayride on September 20th, 1952, and recorded “Kaw-Liga” and other songs three days later. But Hank’s deterioration would continue until his tragic death on New Years Day, 1953.

The picture of Hank leaving the jail cell, and the original police report discovered last year in the basement of the city jail, hangs in the office of Deputy Chief Jay Turner of the Alexander City police department as a reminder of the famous moment in the life of Hank Williams.

“Kaw-Liga” was released posthumously in January of 1953, and spent 14 weeks at #1 on the Billboard country chart. It was arguably Hank’s biggest commercial hit.