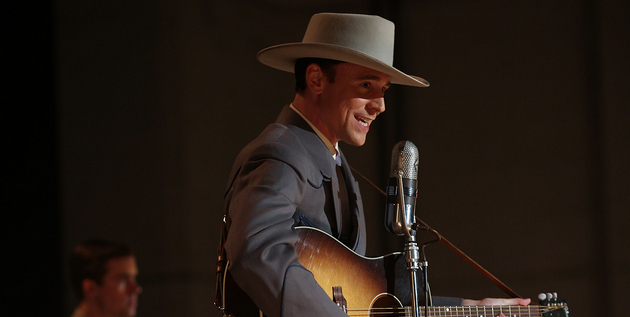 The rest of the world will have to wait until November 27th to see Tom Hiddleston reprise the role of Hank Williams in the much-anticipated film adaptation of Colin Escott’s biography. But the lucky folks attending the Toronto Film Festival this week will get the very first chance to see the film that is already on the tip of many tongues as an early Oscar contender.

I Saw The Light will be screened at the Ryerson Theatre at the Ryerson University Friday, September 11th, and then again the next day at the Elgin/Winter Garden Theatre. This will be the first opportunity for critics, taste makers, Oscar voters, and fans to see the film about the iconic country star who died tragically at the age of 29. I Saw The Light has also been confirmed for the Austin Film Festival October 29th through November 5th, but no screening dates or locations have been announced just yet.

Meanwhile further revelations have been made about some of the cast of the film, including many of the revered personalities that made up Hank’s Drifting Cowboy Band. Most notably, former professional baseball player turned actor Casey Bond has been cast as Hank’s legendary fiddle player Jerry Rivers. Bond was an outfielder for the San Francisco Giants before transitioning to acting. He did not know how to play the fiddle before being hired for I Saw The Light, but learned the instrument and the songs being performed live in the film for the role. “To learn his songs was incredible,” Bond says. He was also invited to dinner by the Rivers’ family, and played “Hey, Good Lookin'” on River’s original fiddle.

Other interesting roles cast in the film recently include Von Lewis to play a young Ray Price. Ray was a roommate of Hank’s for a short period, and also took over the Drifting Cowboys after Hank’s passing. Country singer Faron Young also appears in the film, played by Fred Parker Jr.

From both the recent casting revelations, and the synopsis found on the Toronto Film Festival’s website, we’re beginning to get a sense of the scope of the film’s focus. Not many characters from early in the Hank Williams story have been cast, meaning the 123-minute I Saw The Light may spend very little time, if any, on the early years of the Hank Williams legacy. Meanwhile many of the important people later in Hank’s life leading up to his breakout into superstardom is where the cast’s strongest focus is, especially concerning his love interests. The synopsis from the Toronto Film Festival says,

When Hank marries Audrey Mae Sheppard (Elizabeth Olsen) at a gas station in 1944, success is only a few years away, but Audrey proves a challenge as she replaces Hank’s mother as the prime influence in his career. Though ambitious, Audrey is a woman of limited talent, and Williams is caught between listening to friends who tell him to remove her from his act and a wife who will listen to no one.

With fame, Williams grows increasingly erratic in his behaviour as alcoholism and drug abuse begin to take their toll. And yet the story really gets rolling when, at one of his concerts, Hank spies the young Billie Jean (Maddie Hasson), an aspiring singer who will eventually become his widow.

I Saw The Light is directed by Marc Abraham, produced by RatPac Entertainment, and is being distributed by Sony Pictures Classics. Producers licensed the rights to the original Hank Williams songs for use in the film, and Tom Hiddleston and the rest of the cast is said to perform multiple Hank Williams songs live in the movie.