On Saturday evening (10-17), the highly-anticipated, yet much-maligned movie covering the life of Hank Williams called I Saw The Light made its big star-studded Nashville debut at the Belcourt Theater just south of the city’s Music Row district. Many of the stars of the film were in attendance, including Tom Hiddleston who plays Hank Williams, Elizabeth Olsen who plays Audrey Williams, Maddie Hasson who plays Hank’s second wife Billie Jean, and Bradley Whitford as Fred Rose.

The event transpired 24 hours after the news came down that the release of the film would be delayed until March 27th, taking the once Oscar-buzzed film out of contention for the 2015 awards, and fueling speculation that the film is struggling to gain traction after the terrible reviews that came out of the film’s debut at the Toronto International Film Festival.

After the red carpet ceremony and screening of the film at the Belcourt, festivities moved to Acme Feed & Seed on lower Broadway for an afterparty where Tom Hiddleston performed two sets of 5 or 6 songs each as Hank Williams, singing songs from the country legend’s repertoire that were rehearsed and performed for the movie. About 100 dignitaries, cast, crew, and press were assembled for the event, including Hank Williams’ daughter Jett Williams. At one point much of the cast was dancing barefoot in front of the stage as Hiddleston entertained.

“I just hope that you feel, when you finish watching this movie, that we did Hank proud,” the director, co-producer, and screenplay writer Marc Abraham said to the audience prior to the screening. “There’s nothing I revere more than a great artist, and he was certainly that and gave so much to so many people.”

Tom Hiddleston added, “I hope by the end of this film you’re shouting, ‘Hank!’ to be honest. Playing Hank Williams is one of the great privileges of my life, truly. The idea of bringing a film about Hank Williams to Nashville, to Music City, is beyond my wildest dreams . . . I always think of Hank as a firework. He was burning brightly and made people gasp in awe, and he blazed out too soon. All I wanted to do was do right by him. Tell his truth. Do right by his family and Hank Jr. and Hilary and Holly and Jett and Lucretia and all the people that have become the torchbearers of his legacy. You all know him.”

Hiddleston mentioned all of Hank Sr.’s immediate living family, except Hank Williams III, or Hank3, who has openly criticized the making of the film, especially the choice of Tom Hiddleston to portray Hank. 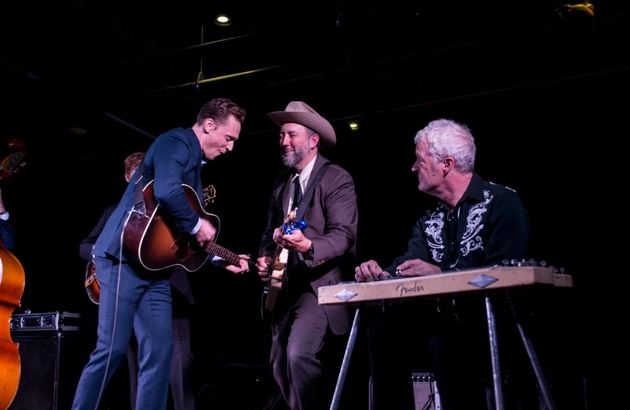