Hank Williams III Named In Assault Lawsuit, But Was He Even There? 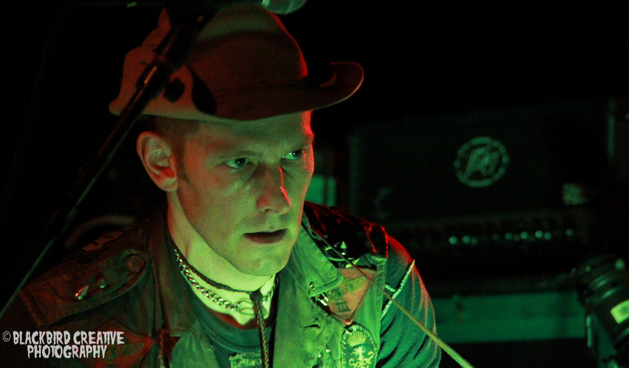 Hank Williams III, the grandson of Hank Williams and the son of Hank Williams Jr., has been named as one of the principal defendants in a lawsuit by a concertgoer who is claiming he was assaulted by the crowd at a concert for the heavy metal band Superjoint, formerly known as Superjoint Ritual. The fan claims the band incited the crowd to assault him. However, all indications are that Hank3 has not been a member of Superjoint Ritual for over 13 years, wasn’t on the premises at the time the alleged assault occurred, and if he was, wasn’t a principal part of the band at the time.

In a lawsuit filed on May 4th, 2017 by David Edwards Sr. in Hamilton County Court in Ohio, the plaintiff claims that at a show at Bogart’s on July 14, 2015 in Clifton, Ohio (a suburb of Cincinnati), he was attacked by the crowd when Superjoint, including lead singer Phil Anselmo and Hank Williams III, incited the crowd to assault him after he complained the band was talking too much. The lawsuit claims:

During the concert, Plaintiff requested Superjoint to stop talking and sing, and otherwise had dialogue with Superjoint; apparently in response to Plaintiff’s request/dialogue, Superjoint, by and through Anselmo and Williams, incited the crowd to violence, eventually resulting in Plaintiff being assaulted by numerous unidentified concertgoers, causing Plaintiff serious personal injury.

However every indication is that Hank Williams III was not at the Bogart’s show, isn’t touring with Superjoint, wasn’t touring with Superjoint at the time, and had nothing to do with the incident, while Superjoint’s less famous members are not being named in the lawsuit at all, nor are any of the concertgoers who perpetrated the alleged assault. This important detail is being left out of news reports on the lawsuit.

Superjoint Ritual, also known just as Superjoint, is a heavy metal band initially formed by former Pantera lead singer Phil Anselmo in 1993. For a short period between 2002 and 2004, Hank3 played bass in the band during a hiatus in his country music career. In 2004, Superjoint Ritual disbanded for a decade, eventually reforming in 2014 with bass guitarist Steven Taylor taking Hank 3’s spot. Due to legal reasons, the band goes under the abbreviated name of Superjoint currently.

Significant media coverage surrounded the re-emergence of Superjoint and the release of reunion tour dates via promoter LiveNation, and none of the reports mention Hank Williams III as part of the band. In fact, some reports go out of their way to indicate Williams would not be part of the new band. Hank3 has also said himself he would not be part of the new Superjoint lineup. Furthermore, there are no reports of Hank3 being at the show at Bogart’s, no reviews placing him at the show, no photos of him at the show posted to Instagram or elsewhere, no chatter on Twitter or Facebook of any appearance, and no videos of Hank3 performing with Superjoint that night, or being in attendance.

In fact video of the July 14, 2015 show at Bogart’s clearly shows that current bass player Steven Taylor is on stage, not Hank3. Video from shows in the days leading up to, and days right after the Bogart’s shows also do not show Hank Williams III as a current participant in Superjoint. The show rundown from setlist.fm makes no indication of a Hank3 guest appearance. Williams also made no public indication that he was touring with Superjoint, or that he made any appearance at the show, or was in the crowd of the 2015 Bogart’s show. Recently, Hank3 has been making no public appearances or performing. So if he had made a public appearance or performed at Bogart’s, that in itself would be newsworthy.

The lawsuit from David Edwards Sr., which also names Bogart’s, LiveNation, House of Blues, and security company Tenable Protective Services in the court action, goes on to say:

Questions remain why Hank Williams III would be named in this lawsuit, especially if he wasn’t there. Did Hank3 make an appearance and incite the crowd, even though there is no record or indication of such? Or is the Plaintiff and his lawyer using high-profile names to draw attention to the lawsuit?

UPDATE 5-24-17 8:42 CDT: According to Hank3’s management, Hank Williams III was not at Bogart’s in Ohio on July 14, 2015, he was at home. Management confirmed that he has not performed since 2014, and was not performing with Superjoint at the time.