Two of country music’s most famous sons have apparently buried the hatchet on a long, 6 year feud that in many ways was one-sided, and was fueled by misunderstanding. 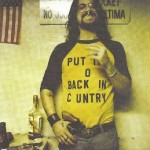 “Got an amazing care package from Hank III with all 3 new records on vinyl & CD + a sweet rebel flag lighter,” Shooter fired off on his Twitter Feed over the weekend. The care package came after a recent exchange of text messages between Shooter and Hank3.

The Shooter vs. Shelton feud started in ernest in March of 2005, when Shooter released his debut country album Put The O Back in Country. Hank3 felt the album title and track were too close to his song “Dick in Dixie” which appeared on Hank3’s 2006 album Straight to Hell, but had been a live show standard for years before. 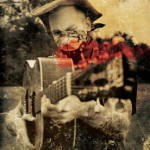 Hank3 told KNAC.com at the time:

Yeah, as for Shooter, he’s here to “put the ‘O’ in country. . . If you wanna go down that road and rip us off, mutherfucker, I’ll see you in ten years and five thousand shows down the road. We’ll see where the fuck you’re at. You know, I called him out and just flat out said, “fuck you if you’re gonna rip us off like that on your first release.

Shooter seemed pretty confused about the matter, telling CMT in 2006:

I don’t even know him. I met him once, I think, for a second. And somehow all this stuff started about how he hates me. I don’t know. It’s, like, stupid. Me, I just play music, and I like his music, and I don’t understand what that’s all about.

The fight over who put the ‘C’ or the ‘O’ where, and who was first, seemed a little senseless when in truth Carlene Carter, famous daughter of June Carter, and stepdaughter of Johnny Cash, was on record in 1979 introducing her song “Swamp Meat Rag” at The Bottom Line in New York by saying, “If this doesn’t put the cunt back in country, I don’t know what will,” while an incognito June and Johnny sat in the audience in shock.

Over the 6 years of the feud, Shooter continued to support Hank3 by playing his music on his satellite radio show, and Hank3’s enthusiasm for the feud seemed to be fueled more by keeping the mythology of the feud alive, rather than with a deep-seeded anger at Shooter. In May of 2010, Hank3 said in an interview, “My 8-10 year run of talking shit I’m sure is close to being over. He’s not as green as he was.”

Meanwhile Shooter is getting ready for the release of his upcoming album Family Man in early 2012, and Hank3, after releasing 4 albums in September, is about to embark on an East Coast tour.