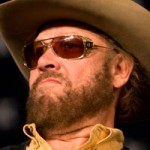 WARNING: If you know you already like this album, turn back now.


If I had to describe this album in one sentence it would be, “Bocephus walks into a studio, cuts on a mic, and begins to blow hard.” Old School, New Rules is a self-important, self-promoting, self-gratifying opus of an American doofus offering no real depth, wisdom, originality, or creative engagement. It is the Shock n’ Y’all of 2012; a political album that relies on the same old tired Hank Jr. modes, and marks a moment of egotistical grandstanding future generations will look back on with embarrassment.

The problem is Bocephus has bought into his own ethos even more than some of his hardcore fans. He truly believes he’s a mad genius with an arsenal of witty one-liners ready to let fly at any moment when in truth he’s in the throes of an egotistical mind fog. I love how the man wants to preach about how we should all live and how the government should run, yet he’s had how many divorces? Jr’s been a part of how many public embarrassments? Been to rehab how many times? And is currently estranged from his son and name sake? Same can be said for Steve Earle and other artists who like to lecture us on the liberal side of things. How about before you preach about the way things ought to be you get your own house in even some minor semblance of order?

This album isn’t just bad, it’s downright painful to listen to in places. Bocephus has adopted this singing style over the years where he sings the first half of a phrase, and then talks the second half for emphasis with these wild up-and-down inflections that are caustic to the ear. Listen:

This album was dated before it even came out. You can hear Jr’s voice grinning as he’s makes points that he thinks are genius when in reality they fall flat, or are cliche, or in some instances, don’t even make sense. Saying “keep the change” in reference to Obama was tired 2 1/2 years ago, but Bocephus calls upon it multiple times in this album. Old School, New Rules creates its own set of cliches by the end, relying the same dumb lines and points over and over.

There’s also this alarming lack of congruency or flow in some songs like the opening track “Takin’ Back The Country,” which goes from his Fox & Friends debacle, to sampling two different Hank Williams songs, a horn section, Obama and EPA bashing, Facebook & Twitter all in a sonic structure that is horrifically Hank Jr. cliche. Good gosh man, just tell a story and try to relate it to some folks. At the end of this song, you feel like your brain was in a blender.

His flag-waving formula song “We Don’t Apologize For America” has the same problem. It starts off as one song and subject, and then becomes another. So does “Cow Turd Blues” where Jr. takes an okay song and ruins it by adding a completely embarrassing self-gratifying diatribe about himself in reference to his ESPN/FOX debacle, about how “There’s some things in this country you don’t mess with. And I am blessed to be on that short list.”

Who the hell says this about themselves?

The song “That Ain’t Good” is sold as some deep-minded treatise on modern-day American struggles when no single line really sells itself. “Old School” might be the most palatable take on the album, but broken down is just a vehicle for Bocephus to brag. Out of all of the songs, “Three Day Trip” is the absolute worst. Take the horrifically over-worn formula of the Kenny Chesney island song, add some humor as flat as a 3-week-old 3-liter of Pepsi, call a woman a “bitch”, and this song should be offensive to just about any and all real country fans.

Did Hank Jr. forget his old routine with Kid Rock where Jr. says in country music, “We don’t say ‘bitch’ we say ‘ma’am'”?

A lot of folks are going “Wow, I just heard “I’m Gonna Get Drunk And Listen To Hank Williams” on the radio, what a great song!” when this is the same song formula as “Whiskey Bent & Hell Bound”, and the same song Jr’s put on every single one of his albums since the history of ever. Take drinking and combine it with Hank song titles and walla, you’ve got a spot filled on the Hank Jr. track list.

Two cover songs, Hank Sr.’s “You Win Again” and Merle Haggard’s “I Think I’ll Just Stay Here And Drink” offer a little respite from the rest of the album, but are excellent examples of when cover songs are unnecessary and really offer no new value to an existing composition.

I understand why people find appeal in Hank Jr. and in this album. It is because they identify with him and his message. I get that, I really do, but in no way is this album helpful to your cause or anyone elses. Instead it speaks to the very cause of the divisiveness in this country. In one breath, Bocephus is talking about how he refuses to give up his big V8, and then in another says he can’t explain why terrorists blow themselves up. Did he ever stop to think that the two might be interconnected? Instead he takes pride in his ignorance saying, “I don’t know.”

And I understand this is supposed to be a “fun” album, but with the massive politicization of the material, it is hard to have fun unless you agree with every word he says. And in fairness to Hank, he’s always put out these types of songs about being an old school, simple man who has difficulty relating to the modern world, almost to the point of making fun of himself. But for every “Dinosaur” song he’s released over the years, he’s released an “All in Alabama.” There used to be depth and balance, with one or two of the funny, opinionated songs per album. Now that’s most of what you get. Hank Jr has become a series of bits and cliches; a bad impersonation of a stereotype of himself.

These political albums rarely work, either for swaying public opinion, or as a piece of art. Neil Young’s Living With War or virtually anything from Todd Snider are also great liberal examples of this, but at least the points in these albums are lucid, and the material is original. It feels like Hank Jr. rushed this album out to profiteer off the election cycle, hindering some of his ideas that with a little more time and thought, could have come across with much more wit.

Hank Jr. got the wrong impression that bawdy political rancor is a positive way to create attention for yourself when the negative publicity from his Fox & Friends interview shined a spotlight on him.

Look, I still consider myself a Hank Jr. fan, and I will fight anyone who says his career back in the late 70’s, early 80’s wasn’t filled with some great songs. But this is a completely wrong direction to start off his post-Curb Records career. I’m not going to choose sides about whose at fault for the political state of America, but what I can say is that neither Obama, Bush, Romney, Hank Jr., Bruce Springsteen, or anyone else has more effect on your life or your state of affairs than you do. Talking down to the other side, which Jr. does with alarming ease on this album (“two and is four, do you get it?”) speaks to the mentality that if someone disagrees with you, they’re inherently stupid. This is exactly why the United States is wickedly polarized and in the midst of one of its biggest political stalemates in history: a fundamental lack of respect and simple-minded reactionary attitudes.

How about speaking to everyone? How about using subtly to talk about political struggles? How about trying to find common ground and understanding? How about simply telling a story that relates to the universal human condition and makes you feel something? Hank Jr. didn’t take one moment out of his political grandstanding and re-hashing of classics and cliches to do this. He should be better than this, and we all should be better than supporting it. This is beyond music. This isn’t Republican vs. Democrat, this is reactionary polarization against rationalization.

And I know what side I want to be on.