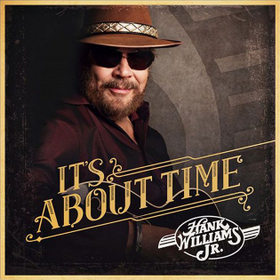 In peep show fashion over the last few days, Hank Williams Jr. has revealed he’ll be releasing his latest album called It’s About Time on January 15th. The album will be available for pre-order on November 4th—the same day Hank Jr. will open the 49th Annual CMA Awards with Eric Church singing the Waylon Jennings version of “Are You Ready For The Country?” The song is said to be the first single from the new record. The album also includes a cover of the country classic “Mental Revenge,” and a remake of “Born to Boogie” with Brantley Gilbert, Justin Moore and Brad Paisley.

It’s About Time will be Hank Jr.’s first album on Big Machine Records’ NASH Icon imprint. He signed to the label meant to give new life to older artists in late April, saying, “Country music singers have always been a real close family and today the Nash Icon family has added me as a new member. I have done shows with Ronnie Dunn, recorded a hit record with Reba and absolutely love Martina McBride,” said Hank Jr. “I am writing songs better than ever and am signed with a label that is already making history ”¦ it’s an exciting time!”

In a recent interview with Billboard, Big Machine Records CEO Scott Borchetta spoke about the strategy with NASH Icon, and what Hank Jr. thinks about his new record.

“Part of the mission of Nash Icon is taking away some of the day-to-day, hand-to-hand combat that you have to do to continue the mainstream country-radio relationship,” Borchetta explained. “These artists have already done it and had the highest highs, and we were able to create a different game board where they don’t have to try to compete with the 20-year-olds. We can say to them, ‘Don’t worry about trying to make a record that’s younger than you are. Go make the record you want to make.’ And if you look at the music that Reba and Ronnie and Hank Jr. [have turned in] — Martina’s still working on stuff. I have an email from Hank Jr. saying, ‘This is my best record ever.'”

However concerns linger about the future of NASH Icon after a management shakeup at Big Machine’s partner in the venture, Cumulus Media. Long-time CEO Lew Dickey was recently demoted in the company, and Lew’s brother John Dickey—one of the biggest proponents of the NASH ventures—left the company entirely. Cumulus is supposed to handle the radio component of revitalizing the careers of country music’s older artists.