The long-awaited movie about the last days of Hank Williams called The Last Ride has finally been granted a theatrical release. It will begin to be shown in select theaters June 22nd, and in a series of historic theaters starting June 1st.

The movie was previously shown in 7 cities in late October of 2011, mostly around Arkansas where the majority of the movie was shot, and both director Harry Thomason, and Henry Thomas (Elliot from ET) who plays Hank Williams are originally from. At that time it was reported a wide release date would be granted sometime in January of 2012, but that release never came. The film will begin a tour of 10 historic theaters around the country (see dates below) as a partnership with Lou Reda Productions. 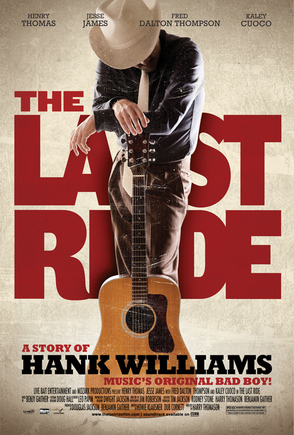 To make a small contribution to the restoration to beloved historic theaters around the nation, “The Last Ride” is partnering up with Lou Reda Productions and a number of historic theaters to allow an exclusive screening of the film before it opens widely. I seems appropriate that a film about a historic American like Hank Williams is being used to help restore an important piece of America’s heritage – its movie palaces.

The film will then be shown in New York, Los Angeles, Phoenix, Atlanta, and Austin, TX from June through August, with more cities potentially to be added soon.

On January 1st 1953, Williams was scheduled to perform in Canton, OH. Because of bad weather, he couldn’t fly as planned, and hired a college student Charles Carr to drive him. Hank suffered from chronic back problems, and had injected himself with morphine during the trip from Knoxville, TN and also was drinking alcohol. Hank Williams died of heart failure sometime that night with varying accounts of exactly where and when, though a gas station in Oak Hill, WV is given credit as Hank’s final destination. Hank was 29.

The Last Ride is not meant to be a historic portrayal of Hank’s final days, but focuses on the interaction between Williams and his young driver, played by Jesse James. Hank is not called by his real name in the movie, instead traveling under the alias “Mr. Wells.”

The movie seems to be going through the same distribution dilemma many small, independent films get dogged with these days. Two other movies that had strong musical ties, Bloodworth, starring Kris Kristofferson, Dwight Yoakam, with an appearance by Hank Williams III, and Last Rites of Ransom Pride, also starring Yoakam and Kristofferson, with score and screenplay contributions by Ray Wylie Hubbard both struggled to find distributions channels, leaving curious fans frustrated.