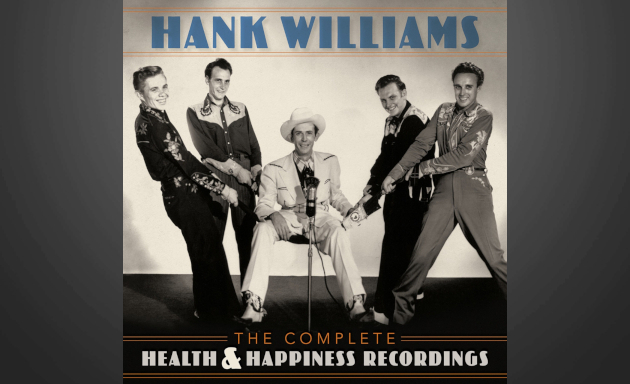 If you have a hankering for Hank and haven’t received your fill of music from the Hillbilly Shakespeare over the years, you’re in luck. BMG is getting ready to release a rare collection of Hank Williams archive material made in October of 1949 called The Complete Health & Happiness Recordings. The 2 CD, 3 vinyl collection is compiled from a short-lived radio show Hank Williams and his Drifting Cowboys recorded at the studios of WSM called the Health & Happiness Show. It will be released June 14th.

Consisting of eight separate shows recorded over multiple days to help promote the controversial Hadacol cure-all, the collection includes renditions of many of Hank’s most iconic songs and standards, as well as rarities, such as his only known recording of “The Tramp on the Street,” which he had included in a self-published songbook several years earlier. It was also the first recordings with Hank Williams backed by his Drifting Cowboy band, with fiddler Jerry Rivers featured prominently on multiple tracks. Even though these recording were made for a live show, some of them are of better quality than Hank’s better-known studio cuts, both due to the quality of the WSM studio, and Hank’s level of sobriety. The collection’s version of “Lost Highway” (hear below) is considered the definitive one by many Hank Williams aficionados.

The Health & Happiness shows were recorded directly to acetate, which were then duplicated onto 16-inch vinyl discs that would be distributed to radio stations throughout the country. This is a cohesive release with all of the material presented unabridged like the shows were played, including WSM DJ Grant Turner’s introductions, and Audrey’s notoriously poor singing. This gives you more than just music, but insight into the history of Hank Williams. These new recordings have been freshly transferred, restored and mastered for this new release, with extensive liner notes from well-known Hank Williams biographer, Colin Escott.

A collection of these songs was first released in 1993 in a now out-of-print edition, and this new edition was also released in limited form for the 2019 Record Store Stay event. Time Life also had a edition in 2001. Cheryl Pawelski of Omnivore Recordings produced the new collection along with Colin Escott and Grammy-winning engineer Michael Graves.

Hadacol was a health elixir created by Louisiana state senator Dudley LeBlanc, and was heavily marketed across the country in the late 40’s on radio programs and the Hadacol Caravan Tour through stars like Hank Williams and Bob Hope. Country music traditionalist and Hank Williams historian Joey Allcorn recently published some rare video footage of Hank on the Hadacol Caravan Tour. The Hadacol craze came to a screeching halt in 1951 amid federal investigations and accusations of fraud, but the recording Hank Williams made remain a treasure trove of material from the life of country music’s first superstar.