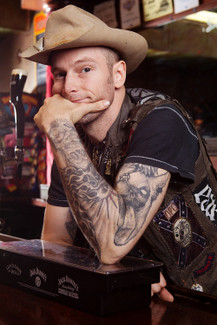 The new Hank Williams biopic I Saw The Light finally opened in select theaters in New York, Los Angeles, and Nashville on Friday, March 25th, and will be released nationwide on April 1st, and the controversy and criticism of the film continues.

I Saw The Light originally debuted at the Toronto International Film Festival on September 11th, 2015 and was immediately slammed by critics. One writer called the film “shockingly bad,” and it has been criticized universally for its terrible screenplay. Multiple reviewers have praised Tom Hiddleston’s depiction of Hank, but that’s about where the plaudits end. Subsequent screenings and reviews have not fared any better, with Rolling Stone‘s Peter Travers saying recently, “Hiddleston is not what’s wrong with this movie. But damn near everything else is.” The film currently holds a deplorable 14% rating on Rotten Tomatoes.

Hank Williams’ grandson, Hank Williams III or Hank3, has been one of the most vocal opponents of the film, and though most of the reporting on his concerns has centered British-born Tom Hiddleston playing Southern icon Hank Williams, Hank3 has also been critical of the entire process, and specifically the director, producer, and screenplay writer for the film, Marc Abraham, who despite having many films under his belt in the producer role, is only making his second appearance as a director.

“I just one(sic) to see one [biopic] done halfway right. It’s because I care,” Hank3 told Fox News on Friday. “It’s the whole approach to this movie. I hate to say it but these things don’t come up that often and when they do, I wish they would be taken more serious. I would ask for a”¦better director. I think this is only [director Marc Abraham’s] second movie and he’s more of a producer and that in it of itself is an issue.”

Hank3 also criticized how the film is being promoted, specifically all of the videos and appearances by Tom Hiddleston singing Hank Williams songs.

“I don’t know what is going on with [Hiddleston] impersonating Hank Williams and making all of these live appearances and it seems they are trying to launch someone’s music career not making a movie. It’s really hard to enjoy the movie when they’re pushing more music on you than acting … I’m trying to get the best movie to be made about him as possible. Let’s hope the light shines on the new Hank Williams movie, but if it doesn’t, everything that I’m bringing up are possible reasons why.”

I Saw The Light was originally scheduled to be released in late 2015 to compete in Oscar season, but after the terrible reviews, the release was delayed. The movie is based off of the biography of Hank Williams by Colin Escott, and Hank’s original songs were licensed for the soundtrack. Hank3 says he wasn’t consulted or contacted at all about the making of the film.