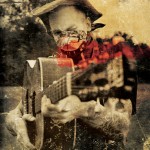 Hank Williams III might be known best for his hellraising attitude on and off the stage, but he’s not afraid to show his sweet side when it comes to Tennessee’s furry friends. As part of his continued support for the Happy Tails Humane, a no kill animal shelter located in Franklin, TN, they have released a new video showing Hank3 spending some down time with his semi-famous pets, and talking about a subject he is just as passionate about as music: animal rescue.

The clip also works as a de facto music video for his song “Trooper’s Holler” that is featured on his latest album Ghost To A Ghost/Guttertown. This is the 3rd album Hank3’s dog Trooper has appeared on. “My dogs have been like family to me. My music and my dogs have always helped me through my darker hours” Hank3 explained in an interview with SCM in August.

The grandson of Hank Williams has played numerous benefits for Happy Tails Humane over the years, and along with this video, has proven that animal awareness and rescue isn’t just a pet project, it is a deep commitment.