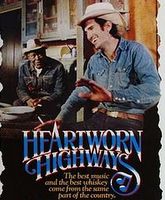 On Sunday (2-10-13) the original filmmakers of the legendary Outlaw country documentary Heartworn Highways participated in an online chat where they answered questions from fans of the cult film originally released in 1981. After being out-of-print since a short run of DVD’s with bonus footage were sold in 2005, the film was finally made available for download and on-demand viewing on Christmas Day, 2012. Heartworn Highways editor Phillip Schopper and producer Graham Leader answered fan’s questions and let some interesting tidbits fly, including that a sequel of the film is currently in the works.

Will There Be a Heartworn Highways Sequel?

Most of the film is in the can and is currently being assembled. We’d like to keep the musicians as a surprise. The film should be completed sometime this summer. –Graham Leader

What about the extra scenes that were on the 2005 DVD?

We are trying to figure an appropriate way and format to get the extras to you. I agree they are pretty incredible and make a movie almost all by themselves. However, we’ve always believed the film has to work as a film, which is to say it has to have a rhythm and be of a reasonable length. It was originally fairly heartbreaking to drop some of that material in order to make a film that would be commercially viable. We were very pleased to be able to make the DVD which allowed us to include some of our favorite moments.

Any plans for a new DVD or Blu-Ray release? Netflix?

We’ve only just released the film online and we’ll release the remastered DVD along with the bonus material when I find the right distributor. The reason it hasn’t been released online until now is because the system of distribution is still going through growing pains and does not necessarily make sense financially for the filmmakers. -Graham Leader

There are lots of reasons to have Netflix! Lots, I love it. But, alas, Heartworn is no longer available there. We hope it will be in the relatively near future in Blu-ray, with the extras –Phillip Schopper

What was the inspiration behind the film?

Jim’s (James Szalapski, director and photographer) friend from Minneapolis, Skinny Dennis Sanchez, who was a bass player who moved to LA and had become good friends with fellow musicians, including Guy Clark who was living there. Skinny turned Jim onto this music. And Jim loved the music and met with Guy and subsequently Townes and the rest of the people in the film. –Phillip Schopper

It grew out of the music of Guy, Townes and David. Everything else happened on the fly after we got there. -Graham Leader

How was it to work with Townes Van Zandt?

To be around Townes was to be seduced by him. Jim had to stay on his toes to capture Townes mercurial whit and genius. Filming was difficult because it was always so crazy around him. To know him was to love him. I saw him several times after the film in New York and London, but I never saw him back in Texas. There were times when Townes was utterly on top of his game and other times when it wasn’t so. – Graham Leader

Where is director James Szalapski now? And when did the film become popular?

Jim tragically passed away before Heartworn Highways was really discovered and before the notion of a DVD or before a DVD market existed. Nobody had any interest in the film until the DVD was released – it was completely underground until the release of the DVD.

How long did it take to film Heartworn Highways?

Once we decided to make the film, filming started the next month. Total of 5 weeks production and a little over a year in post-production.

Was it a difficult choice to allow footage from Heartworn Highways to be used in the Townes Van Zandt documentary Be Here To Love Me?

The footage Margret Brown (Be Here To Love Me director) used far exceeded and abused the understanding we had with her. To add insult to injury, neither Jim (Heartworn director) nor Heartworn Highways were properly credited. -Graham Leader

Where did the title “Heartworn Highways” come from?

Actually, while we were shooting the film the working title was New Country. But then when we were editing a yogurt came out that was called New Country. So we needed a new title. I actually invented the word “heartworn.” We felt the highways, trucks, etc were a real leitmotif and part of the heart of the film. The word just kind of sprang into my head as a combination of careworn and shopworn, a heart that has been well used or even over-used. A few years ago I heard from the Oxford English Dictionary that they were intending to include it in an upcoming edition. –Phillip Schopper