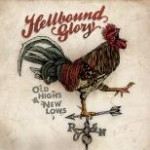 Just announced, this Sunday night (3-27), Hellbound Glory will be broadcasting their performance at Will’s Pub in Orlando, FL on SCM LIVE! Tune in at 9 PM Eastern, 8 Central for opening act Lone Wolf OMB, who just released his debut album a few weeks ago.

I just had the fortune of seeing Hellbound Glory less than a week ago at South by Southwest. It’s a rarity to get such a great mix of top notch songwriting, with an energetic and fun live show. Leroy Virgil’s soul is like a fount of country music. He’s one of those rare birds where songs just burst out of him so quickly and so fluidly, a concerned observer might worry some or many of them would be lost down the drain. Hank Williams was like that. Many other professional songwriters like Roger Alan Wade are like that.

And usually those types live with their demons right up at the surface, and having spent a good amount of time around Leroy during SXSW, I can say he has that disposition as well. That’s how you know his songs are genuine. There is a fire in his eye, and a perennial sideways grin that hints of the no-good running through his brain. However with a kid to his name now, Leroy seemed to know his limitations and boundaries. He may be up until 5 AM, but it will be drinking beer and swapping licks on the guitar, not snorting coke and taking a ride in a police car.

Leroy told me right now he has two full albums of material to record with Hellbound Glory, and two more albums with a new project he’s put together called “The eXcavators”. He debuted a few new songs during the Rusty Knuckles Showcase at SXSW, and I had my camera ready to capture a couple of them, and one of their older, signature songs. Check out the wordsmithing at the beginning of the first video, and please join us Sunday night for this rare live broadcast.