You wouldn’t traditionally think of Oklahoma as a proving ground for cowpunk. As the home to some of the wealthiest names country music can boast like Toby Keith, Garth Brooks, and Mr. & Mrs. Blake Shelton, all sharing the same dirt with many of the founding members and freshest names in the Red Dirt/ Texas country scene like Jason Boland and the Turnpike Troubadours, it’s hard to see where there would be the space for a bunch of loud-playing, punk-inspired hillbillies to get a word in edgewise. 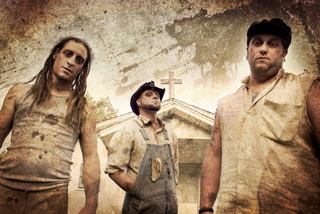 But then again, Red Eye Gravy is not your prototypical cowpunk band. Sure, their sound in places builds out from a high-energy, hard country mindset with the train beat being slapped out in the background, but many of Red Eye Gravy’s songs veer toward the traditional side of country and stay there, while others show they type of depth of songwriting and composition usually reserved for the Americana tag. In the end what you get with Red Eye Gravy is a little bit of all the good stuff and in just the right measure, similar to the homemade concoction that constitutes the band’s name, famous for combining country ham drippings and coffee to smother your favorite Southern food in comfort.

Though I wouldn’t go far as to characterize Red Eye Gravy’s new album Dust Bowl Hangover as conceptualized, there’s certainly a thread and a message throughout this project, very much inspired by the band’s Oklahoma surroundings and the history thereof, painting a very ominous and bleak picture for the plight of the poor man from the dusty plains, both of yesterday and today. Destitution and heartbreak are the theme of Dust Bowl Hangover, however the music itself is a very enjoyable experience, with great melodies, catchy hooks, smart and engaging arrangements, and a remarkable amount of spice and variety in the instrumentation to really elevate this album to something much higher than the band’s humble, undiscovered status. 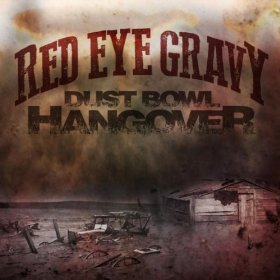 There’s a surprise around nearly every corner of Dust Bowl Hangover. “Hard Livin’ (Comes Easy To Me)” is one of the best country music songs I’ve heard all year so far. The subdued artistry and songwriting efforts of songs like “Take Me Back” and “Pistol” counterbalance the balls-out attitude of cowpunk rockers like “I Wanna Go Home” and “Swingin’ From A Rope.” “Never Thought It Could Be” taps into an excellent melody while a unexpected, muted trumpet takes it to the next level of taste and artistry. Then the very next song “Oklahoma Girls” is an offbeat, foul-mouthed hillbilly elbow swinger featuring some awfully impressive Oklahoma yodeling very few could pull off with such authenticity and skill.

The greatest virtue of Dust Bowl Hangover is that if I was trying to lure an Americana listener into this album, I could pick out a couple of songs that would immediately speak to them. Same could be said for the cowpunk/hellbilly crowd, or for the folks whose hankering is for Texas country. Some of the heavy language here and there, or the stark variety might turn some people off or make Dust Bowl Hangover one to be picked through instead of enjoyed cover to cover, but there truly is something here for everyone, and in multiple servings. The 16 songs may have been a little too much (though the first and last tracks serve as an intro and outtro), and maybe a weaker song like “Give Down The Country” that somewhat failed to meet its objective could have been left on the sidelines and the album condensed down to be even more potent. But I fail to find the passion for many gripes about this effort, and Dust Bowl Hangover comes highly recommended.

Red Eye Gravy is featured on the latest episode of the “Old Soul Radio Show”.