Trigger Down with Pop Country 18 Comments 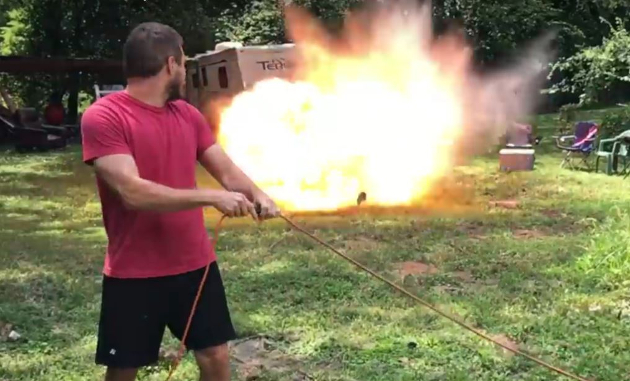 Uncle Rob’s video feed is known for taking everyday life hack topics and mixing in some explosive results. Don’t try this at home kids, but for his latest topic, he outlines the best way to listen to country music superstar Luke Bryan.

“Today I’m going to show you the best way to listen to a Luke Bryan CD,” Uncle Rob starts off. “First, fill a cooler with ice, then dump in your beer, then light up your grill, then put your Luke Bryan CD in the CD player.”

Sounds easy enough. And that’s when the video takes the Uncle Rob twist.

“Then fill a bucket with gasoline. Then, drop [the CD player] in the bucket. Then plug it in.”

You can probably guess what happens next.

“Then crack open a beer, and listen to Skynyrd like a real man,” Uncle Rob suggests in the aftermath.

Uncle Rob has about 25 such videos, all ending in a pretty similar gasoline-fueled catastrophic fashion, but none that has been as explosive as this one. Posted noon Friday (9/16), the video already has nearly 3 million views (by Facebook’s skewed math), and a thousand more on YouTube. It already has more “likes” and views than all of his other videos combined. Why?

Because the rage of the American music fan against what is happening in modern country is like a powder keg, and when you add a little spark and gas, it goes up in flames.