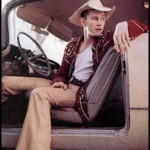 (This is part four in a continuing series about the revitalization of lower Broadway in downtown Nashville. Part 1 / Part 2 / Part 3)

Like JD Wiles of Th’ Legendary Shack Shakers said in part 2 of this series, the revitalization of lower Broadway started in the mid 90’s, but it was in the late 90’s when it really became “special.” Part of the reason for that was undoubtedly the presence of hillbilly royalty, from the bloodline of the man who helped build those buildings. Folks like Gary Bennett and Donnie Herron of BR549, and Joe Buck had come to Nashville to walk the same streets Hank Williams walked, and all of a sudden they had his grandson, and a spitting image, right there amongst them, fighting the fight alongside.

“Lord, honey, you’re a ghost,” is what Minnie Pearl said at first seeing Hank III, and there he was haunting lower Broadway. When the scene got started Hank III was playing in bottom-end punk bands and installing garage doors for extra cash. Then when a one night stand from 1995 unexpectedly surfaced and he was hit with a $60,000 paternity suit and a judge ordered him the “get a real job,” Hank headed down to music row and signed with Curb Records.

Curb had big plans for Hank III. Hank III had others. Curb shipped him off to Branson for a while, put together the ill-conceived The Three Hanks compilation, but meanwhile Hank III was hanging down on lower Broadway in bars like The Bluegrass Inn, and getting heavily influenced by the music happening there.

As lower Broadway began to explode in popularity, touring acts began to makes stops there to get a piece of the action. Many of these were from Austin, TX, that represented their own scene that revolved around The Continental Club on south Congress and other Austin venues. One of these acts was Wayne “The Train” Hancock. As the lower Broadway scene was the biggest concentration of neo-traditionalist bands, people like Wayne and Big Sandy fit right in, and apparently it was at a Wayne Hancock show where Hank III had an epiphany and decided THAT was the style of country music he wanted to play.

Some people think of Hank III as a screaming punk/metal fusing country headbanger, but when he first started he was a strict neo-traditionalist. He would probably prefer the term “Outlaw,”  but his music was parallel with the vibe of that moment in lower Broadway. He played punk music too, but kept his genres strictly separated, pulling his hair back while playing country and only using traditional country instruments. His first album featured two cover songs by Wayne Hancock, and gave Wayne a windfall of new fans. Hank III talks down his first album Risin’ Outlaw quite a bit, but his second album Lovesick, Broke, & Driftin’ featured all Hank III originals (except the last song) and is a pinnacle album of the neo-traditionalist movement.

Here is Hank III in a Curb promotional video, shot on lower Broadway with an interview on the steps of the Ryman, and show footage from lower Broadway’s legendary Bluegrass Inn, including Wayne Hancock covers:

The older you sound, that’s the more punk you’re being.

If there was any question just how important the lower Broadway revival was, Hank III’s presence seemed to legitimize the whole thing. Just like BR549, Th’ Legendary Shack Shakers, Hillbilly Casino, a other lower Broadway bands, Hank III eventually grew out of The Bluegrass Inn, but unlike many of the others, Hank III makes a pilgrimage back in the Winter to play a string of shows. For the past two years, the grandson of Hank Williams who could sell out venues 5 times the size of the Bluegrass Inn for 4 figure guarantees, returns to his roots to play for tips, keeping at least some of the energy of what lower Broadway was in the late 90’s alive.

For the super music nerds: