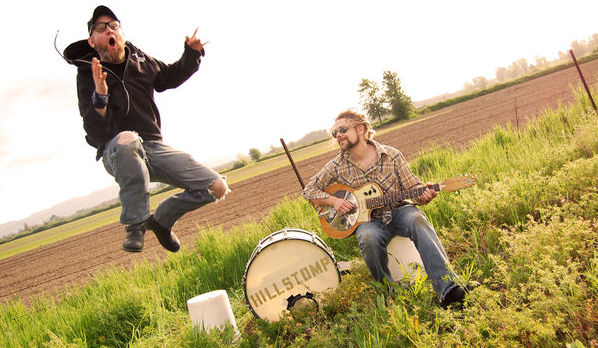 “Honestly it was just the result of screwing around,” says John Johnson, aka Lord Johnny Buckets, one half of the now 12-year-old Deep Blues project from Portland, OR known as Hillstomp. “I was not a drummer, and I was not playing in bands anymore at the time, and Henry and I worked together in a restaurant. He said he wanted to try a duo thing with drums, and I always wanted to play the drums but didn’t have any. Really it was just an excuse to drink beer.”

In the 12 years since Hillstomp’s inception, John Johnson, and guitar player Henry Christian have become one of the Pacific Northwest’s most well-known underground roots duos, garnering a loyal following and making fast fans from their avant-garde approach to blues that combines elements of punk, trance, and most notably, a beat that is delivered by a drum set centered around a bucket instead of a snare drum, accompanied by other orphaned percussion instruments and found objects. “I literally grabbed like a soup pot, a cardboard box, and a bucket out of the kitchen at work, and there was a barbecue lid under my basement stairs, and we just went in the basement and started banging on stuff. And it quickly became apparent it was fitting for the music, and of course as soon as we played a live show, it was cemented. Even if I wanted to change, there’s really no option for that now.” 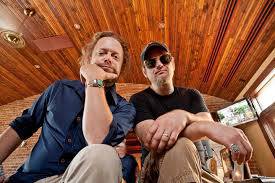 For 10 solid years, Hillstomp terrorized the Pacific Northwest and parts beyond, including playing in Europe a few times. Blame the buckets, blame the duo’s songwriting, blame their energy or Henry Christian’s slide guitar work, but the band has become an inspiration to many others, specially in the bucket department where now it is not uncommon to see a band employ alternatives to traditional drums. Smash, boom, bang. But in September of 2011, the band went on what they dubbed their “Final Tour (for now),” filling fans with the fear of what a world without Hillstomp would sound like.

“We were just kind of worn out on it,” John explains. “Worn out with each other, didn’t really know what we wanted to do and if it was still going to have legs or not. Fortunately we took a break at just the right time. And within six months, we were like, ‘Dude this sucks. I want to play again.’ We missed each other and we missed playing. So we were off for about a year exactly, and then we started writing and playing again.”

In between John Johnson formed a side project with fellow Northwest blues wanderer and songwriter Scott McDougall called Brothers of the Last Watch, releasing an album and playing runs of shows when possible.

“Scott had been doing quite a bit of touring with Hillstomp, so we just had a lot of time hanging out and scheming, and we have a love and respect for each other and wanted to do something. So we got together, made that record, and yeah, it’s been great. We don’t do a lot because Scott is so busy with his solo stuff. I also have another band called Hong Kong Banana. It is as much of a late 60’s, early 70’s Rolling Stones ripoff as we can muster. I play bass.”

The key to Hillstomp’s longevity and to cultivating a strong following has been centered around focusing on their home region instead of trying to hit it big by taking on the world.

“We were never cut out for being in the van for long periods,” John explains. “We realized early on that 2 1/2 weeks or three weekends was pretty much it before we really couldn’t do it anymore. For a long time that was a source of frustration for me. I wanted to tour out to try and make a bigger splash outside of the region. But truthfully we’ve seen a lot of bands do that, burn themselves out, and disappear. Looking at it now, we’ve got a really good thing going on right now in Oregon, Washington, Northern California, and Montana. And I think the way we’ve done it has a lot to do with the fact that 12 years later, we’re still able to do it. We do well enough in those parts to make it worthwhile.”

2013 will go down as the year that the final living piece to the North Mississippi Hill Country’s blues legacy was lost when the legendary T Model Ford passed away—the last of the blues greats first memorialized by Fat Possum Records in the early 90’s that also included greats like R.L. Burnside and Junior Kimbrough. A new generation of blues players who favor the groove-laden, sweaty, stomp style of blues the North Mississippi region is known for continue on. Scott Biram who started playing out in the late 90’s is seen as one of the forefathers of this style of what would become known as Deep Blues by many. Right on his toes was Hillstomp—the Northwest’s Deep Blues chapter, along with Seattle’s Gravelroad that regularly backed T Model Ford up. The term Deep Blues is still used by a small annual festival formed by blues fanatic and barbecue entrepreneur Chris Johnson in Bayport, MN.

“It’s kind of like a big family reunion,” says John Johnson. “I remember one of the years we did it with the Black Diamond Heavies and Van said it felt like an island of misfit toys. Because we play regular blues festivals too, and we’re always the weird one. And then we get to go to that thing, and everybody’s a weirdo. Great people, love all the music. Chris Johnson is probably, he’s a legend, he’s so awesome.”

Recently Hillstomp announced they they had launched a Kickstarter campaign to fund their new album. But after only a week, the duo decided to bail on it.

“We originally wanted to do it because we wanted to make a record in a way that we’ve never been able to make a record before, which is go in to a bigger studio and work with someone who has a track record of making great records. The thing about making records these days is technology change in a way that now anyone with $3000 can make a shitty record. But it still takes knowledge, skill, and experience to make a truly great record.

“I don’t know, it just felt weird. I love the crowd funding thing. Fans like to do it, they obviously choose to do it. It just wasn’t right for us. I think if we had made the record already and we were raising funds to release the record, which a lot of bands do, that would be one thing. But at this point, the entire thing is totally intangible. But the truth is, no matter how hard you try, no matter what your intentions are, you can go in the studio and make a turd. Once it went up there, we both saw ourselves in the studio with the record button on, realizing we were spending other people’s money, who were then going to be waiting for the result, and it just didn’t feel right. We’ll find a way to make the record.”

Hillstomp plans to record their new album this winter, and have it on sale for fans in the spring or early summer. They also are planning a few West Coast tours, to travel to Ontario, and possibly do their first ever East Coast tour in 2014.