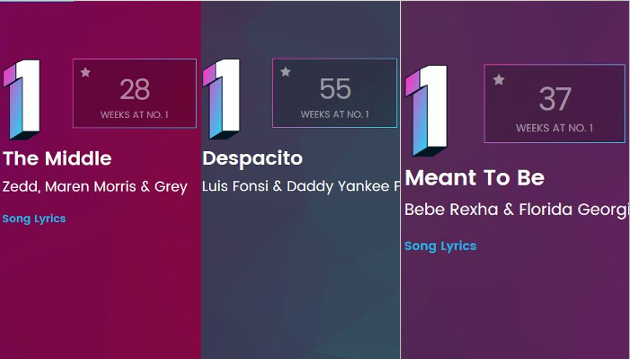 Country isn’t the only music community scratching its head while a fairly innocuous and forgettable pop song rewrites history by hitting record marks for its time at #1 on a genre specific chart, or a performer or group who doesn’t even seem to belong in the genre dominates that genre’s most important chart metrics. Meanwhile other disruptions in common sense are giving even more clear evidence that Billboard’s methodology for its modern charts is completely askew as they attempt to adapt to the streaming age, and appear to be grossly overcompensating and missing critical marks.

This week, the song “The Middle” by EDM producer Zedd became the longest-running #1 song on the Billboard Hot Dance/Electronic Songs chart in history after spending 28 weeks atop the index. A song that started out as a commercial for Target now becomes the greatest dance song in history, at least according to Billboard. “‘The Middle’ just broke the record for the longest running #1 dance song in Billboard ever!” Zedd tweeted out on Tuesday, August 14th, celebrating the achievement.

But Zedd has nothing on Bebe Rexha, and her collaboration with Florida Georgia Line called “Meant To Be.” The song has now spent 37 weeks at #1, meaning it has owned the chart for over 9 months. After cresting the 35 week mark at #1, “Meant To Be” became the longest #1 on Billboard Hot Country Songs chart in the chart’s nearly 70-year-old history. And all of this is for a song from an artist who doesn’t even identify as country, never intended the song to be considered country, didn’t release the song as country initially, hasn’t been played on country radio in any measurable significance in months, and is still racking up weeks at #1 with no end in immediate sight.

But imagine being a rock fan, and having to stare at Imagine Dragons dominating all four top spots on Billboard’s Hot Rock Songs chart. That’s what happened for the first time in the chart’s history on August 3rd of this year, when the group had their single “Thunder” sitting at #1 for its 22nd week, while three other Imagine Dragons songs filled spots 2 through 4. Just like Bebe Rexha in country, Imagine Dragons has drawn the ire of some rock fans of being unrepresentative of the genre. Meanwhile the band’s “Thunder” has now topped the chart for a total of 24 weeks, which is nearing that chart’s record.

In fact looking across the board at Billboard’s genre specific charts, nearly all of them are being dominated by one song that has been in the #1 position for months.

#1’s and weeks on Billboard’s major genre charts the week in October 2012 when the chart rules were first implemented.

…and remember, Drake recently set a record of his own when a total of 27 songs all charted on the Billboard Hot 100 simultaneously after the surprise release of his record Scorpion, including slots 1, 2, 4, 6, 7, 8, and 9 on the chart. There’s a good chance Drake’s “In My Feelings” will dominate the Hot R&B / Hip-Hop Songs chart for the foreseeable future, just like the other songs are dominating their respective charts.

Meanwhile dozens of other songs and artists are being denied the opportunity to spend even a week or two at #1 and benefit from that exposure and recognition as one song continues to dominate. Compare this with the history of these charts where the normal course for a song is to spend a week or two at #1, or possibly five or six weeks if it really was a smash, and anyone can see the clear anomaly these genre-specific charts are presenting.

And none of this passes the “sniff test” so to speak, meaning you look at songs such as Bebe Rexha’s “Meant To Be,” or Zedd’s “The Middle,” they’re not ubiquitous throughout culture or even radio. They’re not a defining song of a generation. They haven’t captured the zeitgeist and become a cultural phenomenon on their own. Think of songs like Psy’s “Gangnam Style,” or even Florida Georgia Line’s “Cruise,” and these were songs that either exploded in popularity, or presented a seismic shift in music that would probably justify the setting of a new record, regardless of anyone’s personal appeal in them. Only the Latin song “Despacito” could boast sparking a culturally significant moment on its own.

When it comes to Billboard’s genre charts, the reason for the discrepancies between common sense and the historic runs of certain songs, it’s mostly due to the new chart rules first implemented in 2012 that give radio spins on other formats credit on the genre specific charts. For example, since Bebe Rexha’s “Meant To Be” continues to receive interest from pop and adult contemporary radio, it continues to be embellished on the Hot Country Songs chart, even though the song doesn’t appear in any significant way on country radio. Also, as Billboard has enhanced the importance of streaming data, songs like “Meant To Be” that have benefited from favorable (and sometimes spurious) playlist placement also receive a boost long after they’ve disappeared from radio proper.

The evidence is clear, and the frustration from genres across the board is evident. But Billboard seems to be asleep at the wheel about the issue, participating itself in harping on the breaking of historic records on genre specific charts with news stories about the accomplishments. Meanwhile decades of music history is being rewritten and torn asunder as today’s superstars rack up surreptitious accomplishments, and diminish the achievements of artists who came before when the charts were handled with a more even-handed approach.