How Country Was the Original Guns N’ Roses? 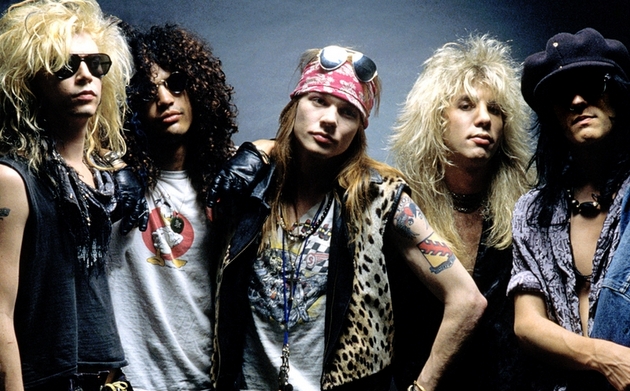 “Guns n’ Roses are what every L.A. band pretends to be.” –Steve Earle

The original lineup of the once massive (and soon to be again) hard rock band Guns N’ Roses is apparently back on speaking terms, and has just been announced as one of the headliners of California’s Coachella Festival in April, with a potential stadium tour brewing according to sources sleeping with the band. That means Slash, Axl, Duff, Izzy, Dizzy, Snoozy, Clyde, wait . . . no Snoozy or Clyde, and who’s the drummer? . . . will all be sweating it out for privileged hipsters in the desert, marking the first time the original lineup will hit the stage since they all lost their shit on each other after their final show in Buenos Aires during the first Clinton term.

Whether you’re swayed by the lifted skirt and perfumed inner thigh of a Guns N’ Roses reunion likely has something to do with when you were born. Since the original lineup’s reign was so short-lived yet burned so bright, Guns N’ Roses left quite a unique legacy. If Axl had overdosed on Quaaludes or taken one to the head and died a rock star death before the original lineup split up, perhaps the band would enjoy the same hero worship as Nirvana. But instead fans got a chance to see Guns N’ Roses sort of implode, and then get sad with Axl drafting replacement players, the band getting inducted into the Hall of Fame under Axl’s protest, some guy named “Buckethead” replacing Slash (who literally played with a bucket on his damn head like some kind of Adam Sandler SNL character also from the Clinton era), while the production for Chinese Democracy burned through a cool $12 million before it could earn a street date.

So should a country fan give a shit about any of this? Well that’s a good question. One of the genius things about Guns N’ Roses was how they were so many things to so many people. That’s how an album in Appetite For Destruction—which on the surface was a full tilt post-glam hard-rock record veering towards punk metal—became the best-selling debut record ever. Right out of the chute, Guns N’ Roses was never starved for throwaway, expletive-laden tirade songs exploring the worst of Axl’s id to act as filler for albums, but many of their blockbuster singles effervesced with Southern harmonies indicative of Skynyrd, Alabama, The Allman’s, and later The Black Crowes. “Paradise City” was the default “Sweet Home Alabama” for the ‘X’ generation. Go listen to that opening guitar frill and tell me it doesn’t remind you of the littered beaches of southern Alabama, or getting arrested for public intoxication in Pensacola.

Maybe it’s a little too guitar heavy to call country, but the reminiscent vibe of “Sweet Child ‘O Mine” could easily be stripped down into a country song if one desired, and their blockbuster acoustic ballad “Patience” could be labeled “country” as much as it could be labeled anything. Moving on to the Use Your Illusion era, you listen to a song like “Yesterdays,” and you wonder if Guns N’ Roses wanted to be a Southern rock band the entire time. The Gospel chorus in their cover of Dylan’s “Knockin’ on Heaven’s Door” gave the song a distinctive Southern flavor, and those are just a few examples from the double album effort.

So was Guns N’ Roses a country band hiding behind a hard rock exterior? Probably not. But what they did do was put a musical legacy together that appealed to many listeners, including to country rock fans. If your sensibilities lean country, you can probably cobble together a G N’ R playlist that won’t make you wince. Meanwhile they symbolized the last relevant hair metal band with their debut single, “Welcome To The Jungle,” found favor with many punk and metal listeners from both their proficiency and edge, and knew how to throw in just enough slower panty wetters to keep the frÃ¤uleins paying attention. It was kind of genius, really.

. . . except the band also inspired an entire generation of mainstream country performers to take the genre in an arena rock direction, with screaming guitars, screeching vocal lines, and bravado and attitude usually not welcome in a country music performance unless you’re watching David Allan Coe. Guns N’ Roses has been name dropped in as many songs recently as Hank. Even Carrie Underwood is out there covering their songs, and Brantley Gilbert has a track called “My Baby’s Guns N’ Roses” on his latest record.

So was Guns N’ Roses a sum positive or negative for country music? It’s hard to say, and it may even be a stupid question to ask. But the reason that the United States and the world is agog over the idea of an original Guns N’ Roses reunion tour is because they come from an era when music was fearless, when it meant something, when it was made by people whose lives were a mess, just like the rest of ours, and that rawness and realness was something we could relate to much better than the choreographed and pre-programmed arena country rock of today.

Guns N’ Roses was a train wreck then, and they’re a washed up train wreck now. But they’re still better than many of the country music choices of today, because at least they were unapologetically themselves.