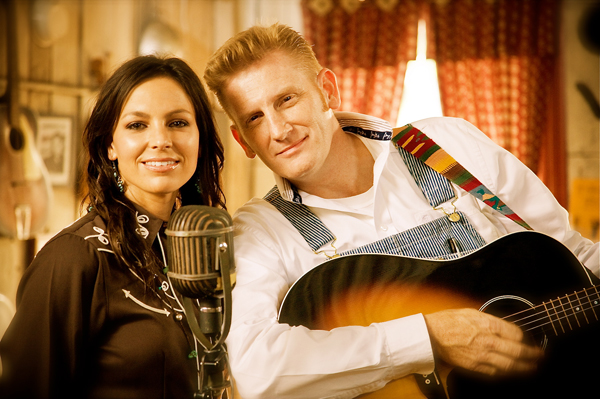 When Joey Martin Feek of the country duo Joey + Rory received a terminal diagnosis for her abdominal Cancer in October, the last thing she was thinking about was the prospects of her country music career. The duo had already won an ACM Award and been nominated for other industry recognition in the past, but all of that took a back seat to the realities facing Feek … until music gave her yet another reason to continue living.

Joey Feek decided to cease her Cancer treatment, but she never gave up on living every moment she had left to the fullest. When the nominations for the 48th Annual Grammy Awards were announced on December 8th, and Joey + Rory were surprised with a nomination for Best Country Duo/Group Performance for their song “If I Needed You,” it gave Joey Feek a new goal. She wanted to live to at least make it to Grammy day, February 15th.

“Joey and I woke (Monday) morning just thankful for the chance to have another day to be together,” Rory Feek told The Tennessean on December 9th after the Grammy nominations were announced. “That was enough. When you honestly don’t know what tomorrow will bring, you don’t think any farther than today. But hearing the news brought not only tears and smiles, it has brought us hope.”

Joey Feek was first diagnosed with cervical Cancer shortly after the birth of the couple’s daughter Indiana in June of 2014; Indiana was born with Down Syndrome. But Joey and Rory’s faith never wavered, despite their story unfolding like a tragedy whose every next turn became more unbelievable and tragic than the one before. Joey was hoping to be well enough to attend the Grammy Awards with husband and singing partner Rory, but as February 15th approached, it became evident that would not be possible.

“Joey tried to talk me into going ”¦ many, many times,” Rory wrote on his This Life I Live blog. “She even had a Southwest ticket purchased for me that I cancelled. I can’t leave her. I won’t. I have done many foolish things and made lots of mistakes in my life, but this isn’t going to be one of them. Instead, I will be sitting beside her and cheering on Little Big Town, and Blake Shelton and Charles and all the talented folks who are nominated in our category and others. It’s an honor for us to just be a part of that night, it truly is.”

On Monday, in lieu of Joey +Rory attending the 2016 Grammy Awards, it was Rory Feek’s daughters Heidi and Hopie, and the duo’s manager Aaron who made the trip. “The girls have asked me to write something for them to read ”¦ just in case,” says Rory Feek. “I told them not to worry about it, but they insist. I can’t imagine our names being called. But then again, Joey and I also couldn’t have imagined us being where we are at all ”¦ the good parts or the bad.”

In the end, their names weren’t called. Little Big Town and their highly-decorated song “Girl Crush” walked away with yet another award, but Joey + Rory had already won. Joey Feek had accomplished her goal, despite the odds. She had made it to the Grammy Awards, she had made it to the release of their latest and final album Hymns That Are Important To Us on February 12th, and she had made it to one more Valentines day with Rory.

“We’ll watch the presenters and performances and scan the cutaways to the audience for our daughters and our manager in the sea of people dressed-to-the-nines for the big night,” said Rory Feek about Grammy night. “And we will smile at each other and wonder how in the world we got so blessed. How we’ve come so far without going anywhere at all.”

And along for the ride has been fans of country music and beyond, who have found infinite inspiration, hope, and wisdom through the Joey Feek story.

Girl Crush, Grammy Awards, Hymns That Are Important To Us, If I Needed You, Joey + Rory, Joey Feek, Little Big Town, Rory Feek