How Many of These Country Music Veterans Can You Name? 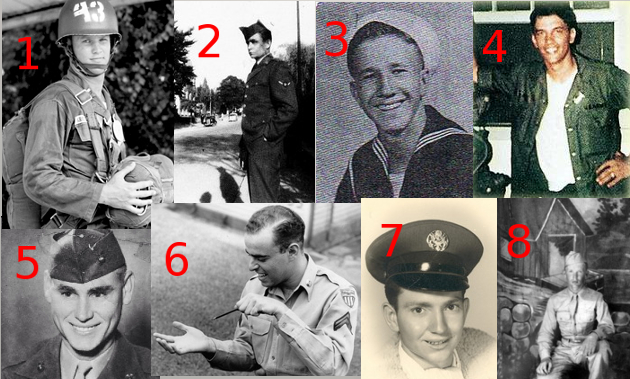 So many of country music’s legendary artists also spent time earlier in their lives serving the country in one capacity or another. And on Veteran’s Day as we pay tribute to ALL the men and women who served in the military and put themselves in harm’s way, let’s have some fun by looking back to see how many of these country legends we can pick out by their pictures.

You can find the answers below. No cheating!

1. Kris Kristofferson – He achieved the rank of Captain in the US Army as a helicopter pilot and Ranger. He received his training at Fort Rucker, Alabama before being deployed to West Germany as part of the 8th Infantry Division. The American Veterans Awards from naming Kris “Veteran of the Year” in 2003.

2. Johnny Cash – Cash spent 4 years in the service, rising to Staff Sargent, and becoming a Morse Code intercept operator working in Landsberg, West Germany. Johnny is given credit for intercepting the first radio transmission announcing the news of the death of Soviet leader Joseph Stalin.

3. Marty Robbins – He joined the Navy as an LCT coxswain during World War II, and was stationed in the Solomon Islands in the Pacific theater. He learned guitar during his service to help pass the time, and picked up a love for Hawaiian music and the moan of the steel guitar.

4. George Strait – George was enlisted in the Army from 1971 to 1975, stationed in Hawaii for the later half of his career as part of the 25th Infantry Division. He performed in an army-sanctioned country band called “Rambling Country.”

5. George Jones – He was enlisted in the Marine Corps in the early 1950’s during The Korean War, stationed in San Jose, California until he was discharged in 1953.

6. Shel Silverstein – Before he was writing country hits like “A Boy Named Sue,” Shel was an illustrator for the Pacific Stars & Stripes military publication. Silverstein was drafted into the Army in 1953 and served in both Korea and Japan. When it was clear Silverstein was not fit for combat, he began illustrating an article series called Take Ten, amusing service members with his drawings and anecdotes about military life.

7. Willie Nelson – Willie joined the Air Force in 1951 in the midst of the Korean War, wanting to be a jet pilot. He received his first basic training at Lackland Air Force Base in San Antonio, but it was concluded Willie was too “absentminded” (as Willie puts it) to be in the cockpit of a jet. So the Air Force shipped him to Shepherd Air Force Base in Wichita Falls, TX, and eventually to Scott Air Force Base in Illinois for more basic training. Eventually they made him a medic, but years of bailing hay in Willie’s hometown of Abbott, TX had given him a bad back condition and he was discharged after 9 months of service.

8. Charlie Louvin – Charlie Louvin of The Louvin Brothers stopped down the legendary country duo twice during their heyday to serve in both World War II and The Korean War.

Read more about Country Music Legends Who Served The Country