How The Abandoned City of Cairo, IL Became a Favorite Muse for Country Artists 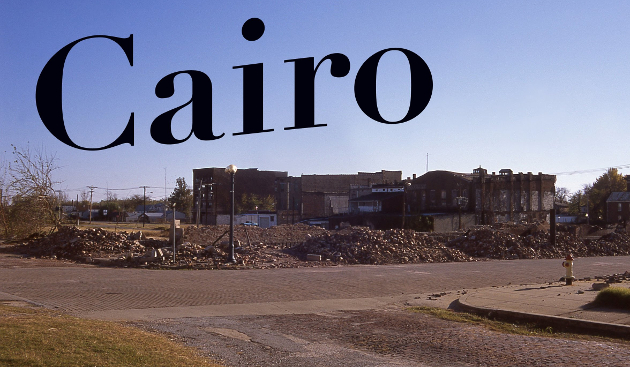 It’s the charge of country and folk musicians to sing about the struggles of the common people that often go woefully unheralded by the rest of popular culture. But sometimes it’s not just people, but places that deserve the dignity of poetic adulation.

Cairo, IL is one of those places that personifies the implosion of America’s once thriving industrial revolution and agrarian bounty. Sitting right at the confluence of the Mississippi and Ohio rivers, right at the southernmost tip of Illinois and at the state’s lowest elevation, it’s a crossroads if there ever was one, with the Kentucky border and the Southern influence mere miles away to the east and south, and Missouri and the Midwest experience as a western neighbor.

No matter what the geographical or economic hardship, Cairo, IL has experienced it. From boom and bust, to flood and racial strife, the city has seen it all, and has the scars to prove it.

“It’s pronounced ‘Karo,’ like the syrup,” says Lori, the City Clerk of Cairo. “We get mad whenever people pronounce it like the city in Egypt.” Cairo obviously pulled its name from the nearby river confluence, and the comparable Egyptian city on the Nile delta, but has decided through its waves of residents over the years to Americanize the annunciation. Very first inhabited in 1818, but with various attempts and commerce and settlement mostly failing, the area remained generally unorganized with only a few ragtag settlers into the 1840’s. Charles Dickens used the location in his novel Martin Chuzzlewit as the inspiration for his nightmare city called “Eden.” Not exactly a glowing recommendation.

But the 1850’s brought the serious growth that the intersection of the two major rivers seemed to promise from the little city, and it began to thrive. During the Civil War, Ulysses S. Grant occupied the town, and used it as a military depot, training base, and his own headquarters for an extended period, coining the city Fort Defiance—a name that is synonymous with the city of Cairo for many. The population began to swell, and due to the large expansion of industrial shipping on the two rivers, by 1920 the population of Cairo was over 15,000, and it was known as a thriving little Midwest river town.

Today, the population of Cairo, IL is an estimated 2,467. The implosion of river transport and the industrial economy, as well as major floods in 1937 and 2011, racial tensions including high-profile lynchings and racial riots stimulated by the economic strife and the melting pot of cultures that settled in Cairo have rendered it a virtual ghost town today, with it’s once picturesque and vibrant downtown drag and its opulent buildings and houses sitting mostly abandoned, overgrown, and in various states of dilapidation. There mere sight of the town has been the subject of numerous photo galleries and magazine features due to his eerie state.

The story of Cairo, IL can be repeated hundreds of times all across the United States, but it’s the strange beauty in Cairo’s specific manner of decay that has inspired musical artists to write and sing about the town to an abundant degree compared to its prominence in the world, so much so that two songs specifically titled “Cairo, IL” have been released in the roots world just this year, and both that are considered in the top leagues of poetic mastery and expression, while other songs and albums over the years have also soliloquized the haunting sense of loneliness one is taken with when beholding Cairo’s vacancy and dilapidation.

“As a kid growing up, it was my favorite part of the drive on the way to Puxico [Missouri], and also, the saddest part as I was leaving to go home back to Nashville,” says well-known Nashville songwriter Natalie Hemby, who included a song called “Cairo, IL” on her new album called Puxico released in January. Puxico is Natalie’s hometown, population just under 900.

“Only the skeletons of buildings remain, and what was once a thriving city one hundred years ago, is now what feels like a ghost town…a relic of its beauty,” says Hemby about Cairo. “I’ve been driving thru that town for 40 years and it has become a landmark of my childhood.”

All the fields are flooded up to Highway 51
Illinois is coming ’cross the bridge where the Old Ohio was
Don’t look away, it will be gone
Kentucky and Missouri, a trinity of states
Nothing’s in a hurry ’cept the water in between the rising banks
Oh nothing moves but nothing stays

Where the longing for the leaving and the welcome-home receiving join
Still I’ll keep driving past the ghost of Cairo, Illinois

“Jonathan and Cassandra Lawson are both writers and artists who are married and in the band The Railers,” Natalie Hemby explains. “We have become good friends over the years, but the turning point of that friendship was when we wrote this song. Jonathan is from Missouri, and he would also pass through Cairo, IL on his way back home. Jonathan is an amazing guitar player and came up with the beautiful acoustic melody that is the backdrop of the song. He and Cassandra poetically helped me carve the song into a story, my story, my memories. I loved it so much, the day we wrote it, I made them sing it with me over and over again.”

The same week Natalie Hemby released her album Puxico with her ode to Cairo in the tracks list, so did a folk duo originally from Illinois, but now residing in New York called The Brother Brothers. On their album Tugboats also exists a song called “Cairo, IL.”

“Having grown up in Peoria, IL I have always been fascinated by river boats, and at the intersection of the Mississippi and the Ohio rivers,” says David Moss of The Brother Brothers. “The song began as an ode to an old river town and then turned into an exploration of the kind of person that would long to return to a town long depressed and with a striking history of racial tension. Many know what it is to be poor, many have seen booming cities go bankrupt, many people live in places where racism is intertwined in its social fabric and history, but with Cairo it is as if these problems have existed forever.”

Well I’m wasting time, wasting time
And I only know one way to go to start again
Let it roll, let it roll, down the banks of the Ohio
When you can’t rely on what you make to pay the rent on time
So I’m going away, down to the Fort Defi-o
Oh way down there in Cairo, Illinois, I’m gonna stay…

And this is just where the songs about, inspired by, or taking place in Cairo, IL begin. Son Volt‘s new album Notes of Blue includes the blues song, “Cairo and Southern.” In 2015, throwback country traditionalist Pokey LaFarge included a song called “Cairo, Illinois” on his Something in the Water album.

Take me to the bridge where the rivers collide
Down in Cairo, Illinois on a Saturday night
I might jump in…

The Chicago-based instrumental band Brokeback composed a song called “Cairo Levee” for their album Illinois River Valley Blues that works like a sonic travelogue through the region.

All of these efforts are dwarfed in the homage paid to Cairo and its history by Illinois-based roots musician and songwriter Stace England, who in 2005 released an entire concept album based on the town called Greetings From Cairo, Illinois dealing with much of the town’s history, and specifically the racial strife that has ravaged the town over the years.

Though places may go abandoned and their dots might deteriorate on the map, their legacies live on in the songs of country and folk musicians who find inspiration in the sense of loss and loneliness they inspire. From early American artists like Woody Guthrie and The Carter Family, to the storytellers of today, the beauty, vibrancy, and people of towns like Cairo, IL may be gone, but they won’t be forgotten.

The Confluence of Rivers & States: The Musical Tributes to Cairo, IL