Trigger Down with Pop Country 111 Comments 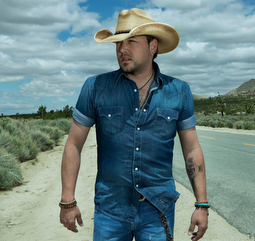 Late Tuesday night (9-17), Jason Aldean took time away from getting fitted with pairs of $700 jeans and polishing up his Medusa of wallet chains to take to Instagram and call out Zac Brown for his recent comments about country music, and specifically Luke Bryan’s song “That’s My Kind Of Night,” characterizing it as the “worst song ever.” Though Zac Brown went out of his way to both say that his problem was not with Luke Bryan, but the song, and specifically clarify that he didn’t necessarily consider himself country either, though he does actually play real music with real instruments, Jason Aldean decided to take the low road with Zac Brown, and make it personal, saying:

I hear some other artist are bashing my boy @lukebryan new song, sayin its the worst song they have ever heard”¦”¦.. To those people runnin their mouths, trust me when i tell u that nobody gives a shit what u think. Its a big ol hit so apparently the fans love it which is what matters. Keep doin ur thing LB!!!

Look ladies and gentlemen, if Jason Aldean was ever pressured to actually write one of his hit songs, he’d choke like a Kardashian giving face love to a professional athlete. And what’s with the language on this prick for someone who’s supposed to be family entertainment? Do you kiss Luke Bryan with that same mouth Jason Aldean?

We already knew from Jason’s numerous stuttering, cardboard-like speaking presentations at stupid country music award shows that the man had less of a handle on the English language than a horny monkey does a greasy football. But if Aldean’s garbled communique is any indication, there’s Chilangos headed back home on the deportation bus that have better command of broken English than this plastic, country music Ken Doll. Match that with the vernacular of a 12-year-old female texter hopped up on half a dozen pixie sticks, and Aldean’s attempt at defending his man friend Luke Bryan is more of a laughable indictment of Aldean’s own character and intellectual attributes than a worthy defense of his “bro.” Aldean should have remembered the advice from those record executives: shut up, look pretty, and only open your mouth when the Auto-tuner is on.

And what do they say about people living in glass houses? A year ago this month, Jason Aldean and his shimmering white teeth were gracing the shiny cover of People Magazine’s Country Music Special Edition, singing the praises of Aldean as a superlative father and family man, while at the same exact time he was hanging out in an LA night club getting handsy with some loose American Idol castoff. Hey, we all make mistakes, but Aldean is two left feet in faux leather boots stained on the inside with residue from his chemical tan. Just stick to making sure you don’t fall off the riser when you’re working through your choreographed stage moves Aldean. We the people of country music will determine who needs to be called out or praised for their contributions to the genre.

And just appreciate this: Aldean took the time to call out Zac Brown, but still to this day has yet to reach out to Joe Diffie, a man he did an entire tribute song to. That’s right, Aldean hasn’t taken the time to even text Joe Diffie and his mullet, yet he’ll go on some rant replete with sophomoric abbreviations through the stupid-ass, adolescent forum of Instagram. Take this advice Aldean, keep your texting thumbs holstered in the loops of your $700 jeans, or tickling the #2 holes of your barely-legal groupies.

Who gives a shit what Zac Brown has to say? I do. We do. Are we the minority? Maybe, but the statistics show that our numbers are growing every day while mainstream music continues to circle the toilet hole of financial insolvency, trying to shore up their golden parachutes by instilling this sugar rush of completely vapid and talent-less hack acts that amount to nothing more than a harey carey maneuver, sticking a dagger right into the heart of country music, sacrificing its long-term health and viability to prop up the facade of the here and now.

You think the popularity of something proves its worth? In the minds and pocketbooks of a growing number of consumers, a song’s mainstream popularity is proper stimulation to avoid it at all costs. In a moment of vanity-filled rage and in a complete vacuum of self-awareness, you may think that you and Luke Bryan are kings of the mountain right now. But one day you’ll wake up and realize that mountain is nothing more than a heap of ashes of what country music once was, with no body or structure to that mound, and that the impending fall from the top will be quite precipitous.

Nobody gives a shit, Jason Aldean? Sorry “bro,” but you’re wrong. I give a shit. I do. And I’m not alone.