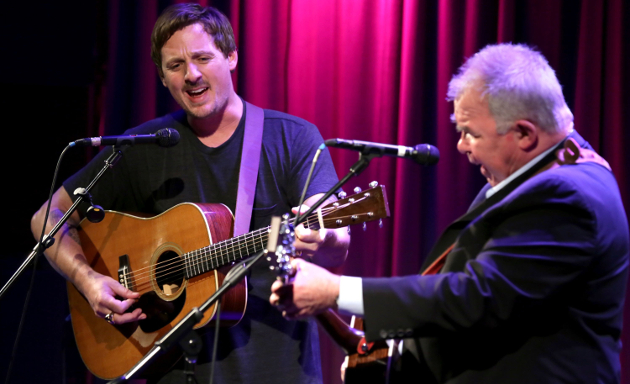 There’s nothing more rewarding than watching your favorite independent artist go from playing lowly bars in backwater towns for barely anybody, to headlining big venues with thousands of people cheering them on. That’s what the early fans of Sturgill Simpson have experienced over the last few years as he’s blown up to mammoth proportions. Of course the one caveat to that success is that you lose the intimacy with the artist and performance when they move out of the clubs and onto bigger stages.

However for the lucky bastards in Ireland, they’ll have the opportunity to not just see Sturgill Simpson in a smaller, intimate setting, but with a songwriting legend and one of his primary mentors, John Prine, when they join forces for a select tour of clubs and small theaters in August.

You really have to marvel at the priorities of Sturgill Simpson. Coming off of his Grammy win for Best Country Album, and his industry-shaking nomination for the all-genre Album of the Year, demand for his presence on stage across North America and around the world is off the charts. Yet he seems perfectly content to book 25 or so major dates for 2017, leaving literally millions of dollars on the table so he can spend more time with his growing family, and then hauls off and books this Ireland stint where money seems like a secondary concern.

Sturgill Simpson was selling out 2,500-capacity venues on consecutive nights before the Grammy noise, and he’s choosing to use the aftermath to play the Grianán Theater in Letterkenney, Ireland, capacity 383. These shows seem to be more for Sturgill than the audience or his pocketbook. The reason we don’t see such bookings in North America is because they wouldn’t be physically possible. People would be ripping each other apart to get tickets.

Sturgill Simpson shares an office with John Prine in Nashville, and these shows seem more like a good excuse to go to breezy Ireland in the heat of the summer and hang out with friends. Oh, and they’ll play some music while they’re over there.

Here are the dates, if the Luck of the Irish has you in the area in August: