If Everything Is So Bad, Why Are Music Sales Increasing? 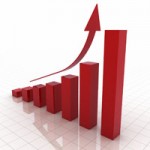 Oh how independent music nerds love to puff their chest out and pontificate about what’s wrong with the mainstream music industry, how it’s creatively bankrupt and was too slow to evolve to the onset of the digital format, and how now the whole industry is on the brink of implosion at any moment, which would be to their little heart’s delights. And meanwhile experts love to tell us how we’re mere months away from music ownership going extinct in favor subscriber and cloud-based formats, how Spotify and other such sites will rule the day.

What none of these nerds and experts seem to be willing to recognizing though (including this one up until recently) is that over the last 18 months, music sales have miraculously pulled out of their nearly decade-long tailspin to stabilize and even increase. And in country music, sales are increasing at a faster rate than the rest of the economy. Sure, we’re still very far away from the glory days of the late 90’s-early 2000’s, but music sales are staging a big comeback, especially in country.

In 2011, overall country music sales were up 4%. Though physical album sales were down slightly, digital album sales saw an increase of 27%. Overall music sales in all genres increased 1.3% from 2010 to 2011, the first time the music industry saw a year-to-year increase since 2004 (See complete 2011 Nielsen music sales figures). Country music sales are doing even better in 2012, increasing 5.6%, or roughly 1 million more units from January to July over the same period in 2011; the biggest increase in all of music. And this is all over a period when Taylor Swift, country’s biggest bread winner and a big seller in pop as well, has not released a new album (her last album Speak Now was released in October 2010). A new Swift release this Fall/Winter can only increase country’s upwards sales trend.

In 2010, we were mere months away from major bankruptcies and massive consolidation all across the music industry. The business was in such a long-trending downward spiral, just to slow the rate of decline would have been a huge success. Brought to the point of extinction, with their backs against the wall, the music industry rallied and began to figure it out. New ways of delivering music to consumers and the digital age will continue to challenge the industry, but those waiting for the fall of Rome shouldn’t hold their breath.

So what happened? How did the music industry right the ship? Here’s some theories:

You want to bankrupt the music industry? Teach girls and women how to steal music. You wonder why most of what you hear on the radio sounds like it was written for little girls and their moms? Because it was. Why do you think the last handful of American Idol winners have been cute young boys? Because young girls are the last ones paying attention. By understanding who is still buying music (girls and their moms), the music industry can focus music to them and not waste resources on music that is likely to sell poorly or be stolen by tech-savvy males.

Many Choices in How to Purchase Music

As much as the ability for consumers to be able to purchase digital singles has created challenges for the album format and price points, it also takes pressure off the consumer who don’t have to buy a whole album of songs when they may only want half or one of them. Meanwhile the resurgence of vinyl has increased that album concept’s viability and the price point for physical music, giving consumers many more options for purchasing music than they had in the CD era.

And purchasing music is no longer an arduous chore if you don’t want it to be. You can download a song or album instantly on your phone, have it sync with your computer or MP3 player through a cloud-based format, and still hunt for vinyl for fun when you have the time. Cheap, digital music caters to the impulse buy, and now many times it’s easier to buy it than to steal it. “The masses like crap” is how independent music fans like to put it, but the practical observation is that busy people are less likely to question the musical choices presented to them through mainstream media. Digital music facilitates this process by making purchasing easy. A catchy song gets stuck in your head from a commercial, so you download it onto your phone on your walk to work in the morning.

Using movies, TV shows, commercials, sporting events, YouTube, etc. to push singles instead of traditional radio has increased exposure across the board for music, reaching more people, and people outside of the music’s normal demographics. This is also kept up another lucrative revenue stream of the music industry: songwriter royalties. Royalties were one of the few stable elements of the industry during the late-2000’s tailspin. Songwriters and performers and their publishing houses are regularly fetching 5 and 6 figures to have their songs basically promoted on national television or in wide release movies. This is a win-win for the industry and artists.

Making music that appeals to the widest possible audience is the best way to increase sales. The biggest selling single in country music in 2011 was Jason Aldean’s country rap “Dirt Road Anthem” that just went triple-platinum last month. Taylor Swift already has a huge base in country and pop, and she just cut a hip-hop single with rapper B.o.B. Lionel Richie has the best-selling “country” album so far in 2012, selling a whopping 912,000 copies, 300,000+ copies more than the second-best, Carrie Underwood’s Blown Away. Break down distinctions between genres and you eliminate barriers to sales potential.

2011’s biggest seller was Adele, an artist many music critics and fans agree brings substance to her music. Many independent music fans may not want to admit that mainstream music is getting better (and the term “better” depends on taste), but what can be said for sure is that the music industry is making music with greater appeal, and judging from Adele’s success, part of that appeal is based on substance. The idea that all corporate music is crap has always been unfair, and may be slowly become outmoded as the industry re-introduces substance to attempt to reintegrate disenfranchised consumers.

Latinos continue to be the US’s largest-growing demographic, and they are more likely to purchase their music in the more traditional, ownership-based or even physical formats. Much of American music is new to them, and as they assimilate their music tastes with their native music, they purchase current hits and backlist classics as they are presented to them through popular media. The cheaper music and music delivery devices have become (you can store music on the phone you’ve already purchased), the more accessible it has become to lower income demographics who used to rely on radio to get their music.

Why Is Country The Fastest-Growing Genre?

It’s not because more people love country music, it’s because the amount of music that is flying the country flag is increasing. Music that used to be considered mainstream rock, pop, adult contemporary, etc.,  is now coming to country to seek support in the form of radio play and award shows. Lionel Ritchie’s Tuskegee became a huge commercial success partly because of the hour-long special the Academy of Country Music (ACM) put together and broadcast on CBS as part of their 2012 Awards season.

From a business standpoint, the music industry and major labels weathered the storm, and are now retooling with the wisdom that they are not bulletproof, and must adapt with the times.