Interview – Rachel Brooke about “Down In The Barnyard”

You can hear the interview in its entirety on Outlaw Radio Episode 134, but for those that would rather read, you can find the meat of the interview transcribed below.

Jashie P: You released this all by yourself, there’s no label behind you on this one, is there?

Rachel Brooke: No. Farmageddon Records is picking it up. I started working on it kind of right as Farmageddon was coming together. So it’s mostly just a self-release, but Farmageddon is helping me with it, pushing it a little bit, so.

Jashie P: Compare it to your last couple of CD’s, the demos and what not. How did you decide what instruments were going to be on each song? 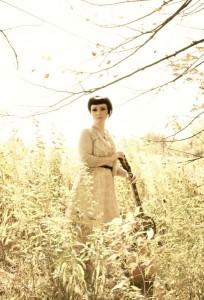 Rachel Brooke: I’ve always been wanting to be just a vocal and guitar, that’s what I love. But I wanted to start setting it up a little bit. I just mess around with each song for a while to see what I like. Some of them just kind of happened like “Mean Kind Of Blues”. I was like, “I want to write something that’s a little more upbeat, put a guitar on it” and that one came out pretty quick. Same with “Don’t Forget Me When I Die”. I wanted a lot of bluegrass sound on it.

Jashie P: How was the record recorded? Was it self-produced, or did you have producers with you?

Rachel Brooke: I recorded the whole thing at home except for the drums, and my dad’s banjo part. We slowly worked on it, waited until I felt good and was in a good mood, and when the cars weren’t going by outside too much, because one thing that would really upset me is when I’d record and there’s some truck going by. I worked on it slowly at home, then I took it up to my brother’s studio in Traverse City, and he helped me mix it, and fixed a lot of the recording mistakes I made because I’m still learning how to record. He mixed it with me and we mastered it. It took a long time.

Jashie P: It’s on iTunes and Amazon, but really if people got it on there, they’re missing out on the cover art. Why don’t you explain the concept of the cover?

Rachel Brooke: I wanted to do something that represents the music. I had my friend Jessica (Varda), and we went out around where I live. We took a picture in front of this barn, like just off the side of the road because we were going to go ask the people if we could take pictures but they weren’t there or something. I don’t know if they’ll ever see it, they may recognize it, I hope not (laughing). And then I had Katie (Umhoefer), she does all Those Poor Bastards artwork. She worked with me and what I was going for. She did all the design artwork, and she did a great job. I’m so happy with it… It’s inspired by the old-time Carter Family kind of stuff. If you ever look up any of their old photographs, it’s all real simple. And it says a lot. It has a lot of emotion in it, and that’s what I wanted.

Jashie P: Your lyrics are really dark, and a lot of these songs tell stories. “The Legend of Morrow Road” is a 7-minute song that’s a really in-depth story. How do these lyrics come to you?

Rachel Brooke: That song is actually a Michigan legend. It’s not the same. What it is, is I didn’t want to write a ghost story, but I wanted to write a legend kind of thing. So I made up the story behind it. If you look it up there’s actually a place close to where I live called Morrow Road, and it’s just about a ghost that walks around there at night, some girl. To me it was kind of cool, but it needed a story behind it. So I just let it come to me, just let my imagination go and it kind of came together…The Carter Family inspired me a lot for this album because I love their simplicity, and the beauty of it. The way their songs are is just so simple, but so meaningful, and that’s what I wanted to do. Say a lot with just being really simple.

Jashie P: There’s a lot of other female artists popping up, you’ve got Six Gun (Britt), Little Lisa (Dixie), Nellie Wilson. What do you think about the whole resurgence of female artists coming along in this little scene?

Rachel Brooke: I think it’s cool, because it seems like there’s a lot of men, they’re really good. But I think it’s not the same without females. They have a different point of view. Even if it’s about the same situation, a girl’s point of view is completely different. I think females naturally are more emotional and see a little bit deeper into situations, and it’s cool.

Jashie P: You’ve got a big tour coming up with Lonesome Wyatt and Those Poor Bastards. How did all that come about?

Rachel Brooke: Those Poor Bastards were putting a tour together and I was asked if I wanted to come along and I said “yeah”. I know Wyatt pretty well and I think it’s gonna be fun. Right now we’re still making all the dates confirmed. Just keep looking on the website for the dates, because they’re gonna keep coming. 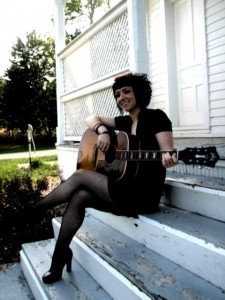 Jashie P: Are you going to do anything from A Bitter Harvest (album with Rachel and Lonesome Wyatt)?

Rachel Brooke: We talked about it, and I’m sure we’ll do a couple.

Jashie P: Is it just going to be you and a guitar again? Or you got a band coming with or anything?

Rachel Brooke: Not this time, I’m just gonna be by myself with a guitar. But I think what I want to do soon is get a band. I think that’s my next step. That’s the plan anyway. I have some people in mind that I really want to work with and I’ve known them for years and grown up with them and I think it would be a perfect fit, it’s just convincing them to do it. And I know they want to, but it’s really got to happen. I’m really trying to push them into doing it.

Jashie P: How many pieces are you looking at?

Rachel Brooke: It’s just gonna be a three piece. It would be me on guitar, another guitarist, and drums. When that comes along, I want to do always an acoustic set, and them bring them up and finish up, you know, blow people away because I really think it’s gonna be that good.

Jashie P: Getting back to A Bitter Harvest, when I talked to Lonesome Wyatt he said there’s a second release being talked about at least. Can you elaborate on that at all?

Rachel Brooke: Yep. We’re still right now working on it, writing some new stuff. I’m waiting for the best ones. It’s gonna happen, but right now we’re just in the beginning of writing… I also want to put out a 7-inch, probably this year with Farmageddon. Me and Darren have been talking about it and I really want to do it because like I said I really want to start introducing an electric show. So what I want to do is a side A, sort of a lo-fi of just me and my guitar like I love, and on side B kind of a high-fi really rocking kind of stuff. Kind of like mean kind of blues, more electric slide kind of stuff.