A couple of weeks ago, I caught up with Bob Wayne before his gig at Austin’s Hole in the Wall to discuss a few things, including the slight delay in the release of his new album Outlaw Carnie and his relationship with the traditionally heavy metal label Century Media, as well as the new band lineup, and how he lets Andy Gibson beat him at video games.

I’ve transcribed the meat of the interview, but you can also listen to the full audio below, recorded in the back of his 80’s era Cadillac limo with steer horns on the front, parked on a busy Austin street the day before Halloween while Bob single handedly consumed a large cheese pizza. You can also listen to an interview I did with his new fiddle player Liz Sloan.

Bob Wayne: This is what’s happening right now with me and the label. They have two different plans with me. In Europe it’s here’s this songwriter guy who lives in his limousine driving down the highway, selling the shit out of the back of his car for five years, you know, serious musician. Whereas American its like woo hoo! Party, chicks, limos, drinks, drugs! I write songs for a show. In a show I can’t just nail them with songs like “Blood to Dust” the whole time because you’ll lose … people are getting drunk. I’m there to put on a show so I want to make you laugh, I want to make you think about some shit for a minute, I’m gonna take your mind off everything, then I’m gonna break it down for you. If you lure them in with that stuff then you can put a serious song in there that’s like “Whoa.”

Triggerman: Tell me about the new album. It was supposed to be out in January, then it was  October 25th, and now all of a sudden it’s January again. 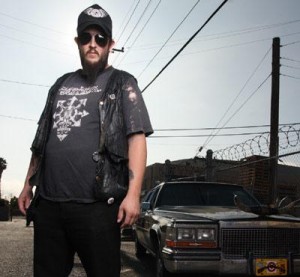 Bob Wayne: At first they told me it was coming out in October, before I ever announced anything. Then they told me “Look Bob we have three other bands coming out in October that are really big. We don’t want to have your album … they want to do a good job on my record because this is new for them. The didn’t want my CD to be back burner. They want it to be a focus and really have a chance. So then they decided to move it to February. Also there was some problems with the bar code. When you rang up my record it came up as some old metal band from the 80’s.

Triggerman: Country is sort of the new metal, and bluegrass is kind of the new punk in a lot of ways, and I think it’s really proactive and smart for Century to be trying to pursue this avenue.

Bob Wayne: They’re going to see how my record goes I think, and if it does real good, they’ll be doing more.

Triggerman: So the new band. Or I guess you’ve always got a new band.

Bob Wayne: Not by choice, for the record. Though sometimes I do like to do what I did with the .357 String Band, or with Zeke backing me up or people from Hank III’s band. That stuff’s fun to do. I’d like to have a core group and I did for a while: Pat, Dan (Infecto), Uncle Buck. We rode that for a good couple years. Thing is I have an unhealthy obsession, I can’t stop touring. And people have their lives, you know. People have their own passions and dreams and I totally understand that, and I totally knew that going into this, and that’s why when I was thinking about band names I just went with Bob Wayne, because I knew how hard I wanted to hit it, and I didn’t want to have to be in a position where I was explaining to people why this person wasn’t in the band anymore.

Bob Wayne: Yeah. Billy Cook is leaving and I’m gonna have Andy Gibson whose like the most amazing musician I know, so.

Triggerman: Liz Sloan is the new fiddle girl that you’re playing with. How did that come about?

Bob Wayne: She emailed me on Facebook. At the time I still had Buck, and I’m actually pretty loyal to people. It’s not me making the decisions, like you’re in you’re out this game. Buck decided he wasn’t going to show up for a few shows, so Liz stepped up and took that slot for those gigs and now she’s there. And she likes it, and she’s really good and she’s meshing really well. And she’s a total road dog, which means a lot.

Triggerman: So you mentioned Andy Gibson. He recorded your new album.

Bob Wayne: He recorded all of my albums, and played half the instruments.

Triggerman: How is it working with him?

Bob Wayne: We play a lot of Medal of Honor, on our breaks. And I’ll let him beat me. And then he feels good about himself. And then he’s like “It’s OK Bob, you can’t win them all. Let’s do that banjo track again.” You know I build up his self-esteem by making him think he’s really good at that game, but really I can slay him in like 5 seconds.