Is Eric Church Copying Shooter Jennings with “The Outsiders”? 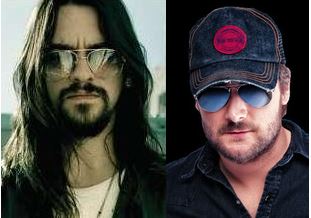 When populating a list of the most polarizing personalities in the greater country music world, right near the top would be Eric Church, who has made a career of not shying away from controversy, but careening straight into it, and Shooter Jennings, the son of Waylon whose unusual approach both on and off the stage has won him devout followers and fierce critics.

Though the two artists don’t have any direct affiliations and have never really crossed paths in any significant manner, over the past year, the way their music has been promoted to the public from their respective albums has been very, very similar.

It was the very first thought that entered my head in mid October of 2013 when seeing Eric Church’s first teaser video for his album The Outsiders, set for release on Feb. 11th. The use of a teaser video itself was the initial tipoff. Not that Shooter Jennings was the very first to use teaser videos like he did in the run up to the release of his album The Other Life in early 2013, but the practice has been quite rare, especially in country music. And that was just the very beginning. So many other things that have transpired in Eric Church’s The Outsiders release that so closely parallel the release of Shooter’s The Other Life, that even if it is not purposeful or a “ripoff”, it is remarkable enough to point out nonetheless.

In fairness, even though Eric Church is the man whose name is on The Outsiders publicity material, it is not him alone, if him at all, but filmmakers and other production crew members that are helping him put The Outsiders roll out together, just as Shooter Jennings had a filmmaker named Blake Judd helping him with his project. But the similarities can’t be denied. Let’s take a look at them:

The roll out for Shooter’s The Other Life album was supported by a short film by filmmaker Blake Judd of Judd Films. Teaser videos for the album, and full music videos for some of the songs were pulled from The Other Life film for promotional purposes.

As Shooter Jennings explained to baeblemusic.com, his label Entertainment One was willing to give him a video budget for the album “because they felt like it was more effective to create content … which I totally agree with … [rather than] you know, promoting stuff by just throwing money at radio or whatever.” So instead of making specific videos for individual songs from the album, Shooter and his team decided to make a short film that videos for the songs could be taken from.

The story and film snippets from The Other Life were purposely vague to create attention and intrigue in the project, and hinted to a deeper storyline that would eventually resolve when the full movie and a comic book was revealed. “…so we’re looking at it and we’re like ‘This thing is weird, but it’s cool,'” said Shooter at the time. “We’re sort of unveiling each part of it in a way, but it ends up tying all together very nicely…I think that when you see the whole thing it’s gonna make a little more sense.”

When it came to the roll out of Eric Church’s The Outsiders eight months later, almost the same exact video concept was employed to promote the album, with vague, ambiguous plot lines to create intrigue and hint to a larger narrative, which would eventually resolve once all the videos and the album were released.

“We’ve conceived and conceptualized what these videos are gonna be,” Eric Church told The Boot on January 29th, 2014. “There’s a storyline, so basically everybody you see…all the characters, they each have a story line and they all relate to each other… And we wanted it to be this big mystery, level of intrigue, that just was fun for fans that we could have this thing of trying to figure it out and looking at where clues were.”

Both album roll outs used “teaser” videos ahead of the release—short, purposely-incomplete content meant to create interest in the project. Check out the first two teaser videos from the two respective projects: Shooter’s that was released on Jan 1st, 2013, and Eric Church’s that was released on October 13, 2013. Notice the primary elements of both teasers is a vague, disconnected story hinting to a larger narrative, with a dark, surreal vibe. Also notice that the coloring of both videos is very similar—darker, grayscale and sepia tones—and how both teaser videos conclude in a hard cut to black.

After the first round of teaser videos, both Eric Church and Shooter Jennings released full-length music videos ahead of their albums. Shooter released his first video on March 9th, 2013, and Eric released his first on November 1st, 2013. In the two videos below, notice once again how they both have vague, disconnected story lines hinting to a larger narrative to be resolved in the future.

“The eerie resemblance to what Shooter and I created for ‘The Other Life’ campaign is most definitely there,” says filmmaker Blake Judd. “The idea of the teaser trailer and a short film/continual music video series we proudly worked on does seem to have a lot of parallels to what Church is doing. Maybe someone in his camp had this vision and they ran with it or maybe it was Church himself. And maybe they tried to emulate what we did and maybe not. Regardless of it all, the idea of a cross platform campaign; record, film, comic, print, VHS and digital release was something we’d never seen before, and Shooter and I are very proud of it.”

For Eric Church’s part, he told The Boot about the vagueness in his videos, “I don’t understand it either.”

4. The Name “The Outsiders”

The similarities with the video campaigns is one thing, and could be open to many different points-of-view and interpretations, especially depending on how one’s allegiances fall with the two artists. But the naming of the two albums is where the similarity between The Outsiders and The Other Life gets especially strange.

“The Outsiders” is not just the album title and the name of Eric’s lead single, it’s the cohesive theme of the entire Eric Church record and roll out. Interestingly enough, on Shooter’s album The Other Life, there is also a song called “The Outsider.” But it goes even deeper than that.

Originally, Shooter’s The Other Life album was going to be called The Outsider.

In an interview with The Boot on March 19th, 2013, Shooter said, “At first we were going to call [the album] ‘The Outsider’, but once we got into the film we thought, ‘Well, it’s like a mirror, a dark mirror of what ‘Family Man’ was.'” An interview with Shooter Jennings three days later with Rolling Stone starts off with the sentence, “Shooter Jennings may be known for his status spearheading all things outsider in the music world…”

It is also important to note that previously Eric Church has been accused of mimicking the T-shirt designs and concepts from another independent country music artist, Hank Williams III or Hank3. Interestingly enough, Hank3 once accused Shooter Jennings of stealing his concept and persona when Shooter came out with his first album Put The ‘O’ Back in Country that was very similar to the lyrics of the Hank3 song “Dick In Dixie”.

Also, in August of 2011, Shooter Jennings released a song called “Outlaw You,” calling out the new Outlaws of country, of which Eric Church is considered a part of. Though Shooter Jennings has never said directly that the song was written about Eric Church, he alluded this to Saving Country Music around the release of “Outlaw You.” Even though the song was first released in 2011, it wasn’t until 2013 on Shooter’s album The Other Life that the song was released on an record.

Should Eric Church be accused of ripping off Shooter Jennings? That may be a little harsh. As stated above, Church’s involvement in the video aspect of his album may be limited, and it isn’t as if Shooter Jennings is the first to use a linear video campaign. But what is for sure is that Eric Church’s “The Outsiders” concept is certainly not as novel and original as they would like to have you believe.