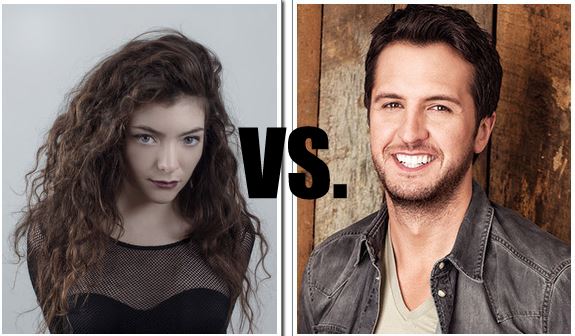 “I was driving. My two daughters, Violet and Harper, who are eight and five years old, started singing along. I was so happy and relieved that my two girls were singing a popular song on the radio that had some substance and depth, which I considered to be healthy for them as kids. I know that sounds kind of parent-ish.”

This was the revelation former Nirvana drummer and and current Foo Fighter Dave Grohl had when listening with his kids to a song from one of the world’s biggest pop stars right now: Lorde. Grohl went on to tell Rolling Stone, “When I met her I said, ‘When I first heard your song on the radio and my kids sang along I felt like there was hope for my kids to grow up in an environment which is more than just superficial.'”

Between 2011 and 2013, the biggest-selling pop star in the world was not Britney Spears, Miley Cyrus, or Lady Gaga. It was Adele. Her album 21 absolutely dominated popular music for two straight years, and had critics raving about the style and substance the singer exuded, while not fitting the form of the typical pop star stereotype. Lorde does not fit the pop star stereotype either. She razzes on photo reporters for blotching out her less-than-perfect skin, and tight fitting fare doesn’t seem to be her bag.

The whole theorem that pop music is just an excuse to oogle at pretty people has a problem holding up when you look at some of the recent trends in much of the pop world. Of course there’s still exceptions, and the weighty nature of Lorde and Adele can be debated. But even when looking at other Top 10 artists like Pharrell, Justin Timberlake, and Ed Sheeran, these aren’t the customary pop specimens with zero substance that are solely based on image. The pasty, short, red-headed Sheeran with his original songs and acoustic guitar is nothing similar to the showy pop performers of yesteryear. And though their names might be splattered all over the press, artists like Lady Gaga and Justin Bieber aren’t placing as well in the charts or sales numbers as one might expect.

I don’t have any data to back my assertions up. No pie graphs or chart analyses; this is strictly anecdotal. But I’ll be damned that if in 2014, your average pop star isn’t more likely to outpace your average country star when it comes to substance and depth in their music. Recently critically-acclaimed country star Kacey Musgraves announced she’d be writing and playing some concert dates with Katy Perry. Oh how the hounds erupted about what a travesty this was. But at least Kacey Musgraves is writing her own songs, with another artist that writes her own songs, and those songs are about something more than lists of countryisms with no narrative. Isn’t this a better alternative than Dallas Davidson and three other drunk douchebags in a round robin throwing “beer, truck, girl” into a hopper and writing a song depending on however they land? It may say more about mainstream country music than it says about Kacey Musgraves that she has to reach out to the pop world to find collaborators she feels she can relate to.

“Pop” is the perennial bad word in country music to where even pop country stars tend to shy away from the term. Why? Because it infers a lack of artistic merit. Some of the biggest pop stars in the world still want to be regarded as artists of substance by their peers and fans. We already see many artists now residing in the ranks of the Americana and bluegrass worlds shy away from the term “country” even though their music may fit that term traditionally, simply because they don’t want to be lumped in with the stuff being played on the radio. This trend is robbing mainstream country of some of the critical talent it could use to create more balance and substance in the format. Country used to be the safe place on the dial, and you wouldn’t have to worry about listening to it with your kids in the car, unlike KISS-FM. Now that dynamic has flipped, and it leaves one wondering if in the future “country” will be that bad word that infers a lack of artistic merit. Or if we haven’t already arrived there.