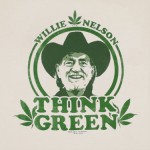 e last week, Willie Nelson released a new song “Roll Me Up And Smoke Me When I Die”. It’s a good, catchy song, just like his recent collaboration with Snoop Dogg called “Superman”, that starts out, “Too many pain pills, too much pot. Trying to be something that I’m not.” And we can’t forget (though many of us have tried) the Toby Keith joke song “I’ll Never Smoke Weed With Willie Again.”

Willie’s friend Ray Benson of Asleep At The Wheel has a current musical called A Ride With Bob about the life of Bob Wills, Willie Nelson’s boyhood hero. In the play, Willie is ostensibly a comic relief character, who comes out in Pocahontas braids, runs from one side of the stage to the other, stopping to tweeze his fingers together in the universal pot sign, and belt out a few pot-related jokes before darting off stage.

Willie Nelson is an American treasure, one of the worlds greatest pacifists, an advocate for farmers, biofuels, and countless other causes, as well as being one of the most revered living American artists, and one of the greatest country music legends of all time. His album Red Headed Stranger is disputably the greatest, most important country album ever. But as time goes on, what Willie seems to be best known for is a guy who happens to smoke pot. His arrest in Texas for pot possession had joke writers churning out Willie weed one-liners for late night talk shows and such, with many ignoring that Willie was willing to give up his own freedom to prove a point about the skewed nature of our nation’s drug laws.

Marijuana is a plant. You smoke it to get high. Plain and simple. Without question, the possession of it should at least decriminalized so we are not filling up prisons with non-violent offenders, but it is not a wonder drug either, nor would legalizing it solve all the world’s economic problems as some would advertise. The truth lies somewhere in the middle like with many things, but what I am concerned with is that Willie’s weed identity is trumping, if not marginalizing the other accomplishments of one of our country’s elder statesmen, including his marijuana advocacy work.

…I’d bet dollars to donuts #3 would take the day. And if marijuana was legal, it would simply be a footnote to Willie’s legacy, like a baseball player’s favorite ice cream. And as evidenced by this new song, without question, Willie himself is fueling this fire, though I’ve been concerned for years that legions of folks are always trying to figure out how to put Willie’s mug on whatever they are peddling, and Willie, always willing to be gracious, concedes.

So my question is, is Willie Nelson’s pot identity fair to his overall legacy? Is he becoming a pot punchline? Or am I higher than a Georgia pine?