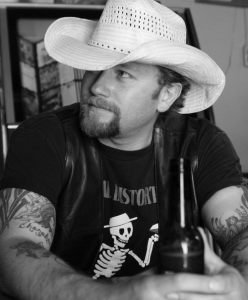 Can I just go ahead and declare that Jackson Taylor & The Sinners are officially the funnest band in country music right now? Do I have the unilateral authority to do that? Can we somehow get that certified through oath and affirmation? Because hot damn, if their latest album Crazy Again doesn’t leave you in a good mood, then you’re one hell of a red ass.

Jackson Taylor & The Sinners inhabit this strange niche in the music world; one that sometimes results in the band being overlooked when people are talking about the “best” in any given sphere of country. Their spirit and sound is more akin to the underground, with a punk attitude and sometimes provocative language. But logistically The Sinners are embedded more into the Texas / Red Dirt scene, despite being based now out of Wichita, KS. Over time their ability to cross mindsets, styles, and scenes has left them with no expectations to fulfill, a truly unique sound, and a wide swath of fans that resulted in Crazy Again being the first of their career to chart on Billboard.

You could call Jackson Taylor Southern rock if you wanted, and to save an argument, that label would work just fine. But what sets Jackson Taylor & The Sinners apart is that they’re able walk right up to the Southern Rock’s border with country, but not be tempted to completely cross it (except for the occasional junket). The drums are heavy, the guitar is crunchy and loud, but the steel guitar is hot in the mix too, and boiled down the music rests firmly on Jackson Taylor’s country-style songwriting. 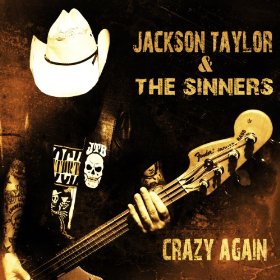 Crazy Again is a complete effort. Sensible, but not stylized, sincere but not sappy, it simply fills you with an appreciation of life, even when it delves into sad subjects. There’s just something unexplainable about Jackson Taylor & The Sinner’s music that makes you want to meet these dudes in person, hang out with them, and try to tear off some of their infectious and everlasting good time attitude and incorporate it into your own little world. At the same time there’s an appreciation for composition to their music, a sincerity, and a good dollop of wit to where you don’t feel insulted for listening like you do with so many of country’s new school party bands. It’s like Waylon Jennings with a well-balanced mood, and everything is punctuated by Jackson Taylor’s singular sarcastic personality that he embeds so well in the music.

Talking about the songs on Crazy Again, you have to start with “Rain,” which may go down as one of the band’s best ever. Anthemic and immediately infectious, it may sound clichÃ¨ to say it, but this is one of those songs you can’t listen to loud enough. You can’t believe “Rain” is only 4 minutes long because it takes you so many places. “Whiskey Drinking Song” embodies the Sinner’s uninhibited ability to grip an entire barroom in a good time, while songs like “She’s Not Your Girlfriend” and “What A Way To Go” have familiar-enough country themes to quickly draw you in, but not leave you feeling like you’ve heard them before. Crazy Again is an album that’s easy to love.

Where in the country music world does Jackson Taylor & The Sinners belong? If Crazy Again is any indication, they don’t need to belong anywhere specifically, they deserve to belong everywhere.