Few performers in the last few years have embodied the Outlaw honky tonk spirit and injected it with a dose of West Coast and Bakersfield flavor like Jaime Wyatt. That’s one of the reasons her debut country EP Felony Blues ended up being nominated for the Saving Country Music 2017 Album of the Year. Full of grit and honesty, it was the true story of getting busted for robbing her heroin dealer and ending up in a California penitentiary that put a potency behind her music few others can present.

Now she’s back with a full LP called Neon Cross to be released by New West records on May 29th, and is once again being as honest and unapologetically country as ever, damn what the public thinks. Produced by regular tour mate Shooter Jennings, Wyatt bares her soul in 11 songs with appearances by Shooter, his mom Jessi Colter, and multiple instrumental contributions from Neal Casal, who passed away tragically in 2019.

“I tried not to have any filter with these songs,” Wyatt says, “Because I’ll be honest—it feels like I’m gonna die if I don’t tell people how I feel and who I am. It sounds so dramatic, but that’s the truth.”

Whether that’s in the song “By Your Side,” which she says she wrote “after my dad died and my best friend overdosed, and I wasn’t able to show up for either of them because I was loaded,” or in the song “Rattlesnake Girl” where she reveals for the first time in her music that she’s gay, it’s once again the honesty coming from Wyatt that makes her music so compelling. 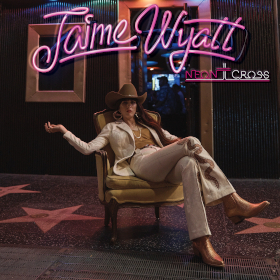 “I’m not, like, on the internet with flying rainbows,” she says, “[But] I’m also basically coming out to the world with this record. My experience with recovery made me realize I lost years of my life being in the closet and living a lie and trying to be someone else. I just can’t do it anymore. And yeah, I’m scared there are people that like country music that aren’t gonna like that I’m gay. But ultimately I’m going to die if I can’t be who I am.”

But people that like country music shouldn’t care who Wyatt chooses to bed down with. What they care about is that Jaime Wyatt is country, and boldly keeping the twang and spirit of honest songwriting alive, as can be heard in the title track from the album that includes that Palomino drive in the rhythm that made her first record so infectious (listen below).

“Shooter’s my friend and, yeah, he’s Shooter Jennings,” Wyatt says. “But when it comes to the studio I don’t care who you are—I’m really, really decisive about what I want, so I’ve got to be able to work with you. And what really sold me on Shooter is that he understands grooves—he gets how to instruct a band to build a groove that is so powerful underneath a song. And it’s crazy because that’s what Waylon did. He always had these rad country songs with these super-weird, like, funky rock ‘n’ roll grooves under them. He would take things to interesting and unexpected places. Shooter has that same instinct.”

Born in Los Angeles but now living in Nashville, Wyatt brings a unique spirit to her music that separates her from the herd of throwback hipsters in Nudie suits, or self-professed Outlaws with little real world experience to back it up.

“I mean, honestly, I don’t feel like I fit in anywhere,” she says, while acknowledging she’s an introvert. “But that’s fine—I wouldn’t want to get too comfortable. Because as an artist, being unique is my greatest asset. So if I were to fall into a scene, I probably wouldn’t push myself to really make something that is captivating. It’s like John Lennon said—there’s nothing you can sing that can’t be sung. But hopefully you can at least put a new spin on it. I’m just a songwriter, and I spend a good portion of my life in barrooms performing and worshipping country music and rock ‘n’ roll and telling my story. And I do it because I believe in the power of music, and I believe that music has saved my life in so many ways. And that belief is a powerful thing.”