Jamie Lynn Spears Surprises w/ “How Could I Want More” 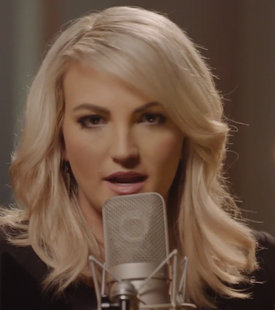 The reason an artist like Jamie Lynn Spears should be dealt with in a speculative manner when she announces she wants to pursue a country music career is because from the beginning, it will be more about her name than the music. As much as we look at country music’s very top fashion plate stars as unfairly sitting atop a pedestal without the proper dues paid, when you actually delve into many of their personal stories, it is rarely the case. The recent death of Outlaw country artist Wayne Mills illustrated this when it came out that Blake Shelton opened for Wayne while making his way up the ranks. Even Taylor Swift spent years playing radio tours and doing acoustic shows at biker bars before her big break.

But with Jamie, her name allows her to circumvent all of these impleasantries and go right to the level of opening slots on theater and arena tours, and mainstream radio consideration. If you want to draw a parallel to another recent “gone country” celebrity artist, a good one would be Jessica Simpson who shot right ahead of everyone else in line to play headline shows and be showcased on the Grand Ole Opry. But as we all know, even the historically pliable and gullible mainstream country music fan didn’t bite on Simpson, and because she had never spent time cultivating a fan base, she had no level to fall back to. If she couldn’t be playing in front of thousands of people and buy fuel for 3 tour buses, her career wasn’t feasible on any level.

Jamie Lynn Spears had two major choices she could make with what direction to go in the country realm. She could be one of these bellicose, bawdy, hard-edged, lighting-matches-off-of-shotgun-barrels-to-burn-the-trailer-of-your ex-boyfriend-down type artists, or she could join the new generation of progressive country women writing their own songs and reintegrating substance into the country genre. From the sound of her first single—though I caution very heavily that this is just one song—from the looks of things at the moment, Jamie Lynn has chosen the latter.

There still is a very long way to go here, and much more to be revealed. I still remain speculative of the platinum blonde hair and where Jamie Lynn’s heart truly lies, and how easy it would be for her to make the first single one that allows her to slide past the guard of the country music gatekeepers only to later spring a big pop surprise. But I’ll be damned if her first single “How Could I Want More” is not bad at all.

There’s really not much to add to what most people are parroting about this song already: “Not great, but hey, better than most of what you hear on radio, and definitely unexpected.” And why not make good music, and the music you want if you’re a woman in country music right now? Unless you have huge tits or your first name is Taylor, the fat cat good ol’ boys who control country radio aren’t going to play it anyway, so you might as well make something you’re proud of.

“How Could I Want More” is very on par with the Ashley Monroes and Kacey Musgraves of the moment. Tasteful, story-based, touching music with sensible roots elements like lilting steel guitar embedded in a song with a universal theme. It’s also interesting that in the video, Jamie Lynn is seen writing and musing on lyrics, illustrating that she doesn’t want to be known as just an entertainer, but an artist.

This all speaks yet again to how women right now are leading the way in country music, and how there are reasons to be positive overall about country music’s direction. Nobody saw this coming. Nobody. So I’m not the only one who needs to pick up a fork and dig deep into that can of crow, and I do so with a grin because the fact that a former Nickelodeon star turned 16-year-old teen celebrity mom has started off her “gone country” career making music that has us all nodding our heads in approval speaks to how far we have come, however awful Luke Bryan’s next tailgate single is.

Good on Jamie. Let’s just hope this is a sign of things to come, and not a Trojan Horse.