Jason Aldean Just Released a Song Called “We Back” 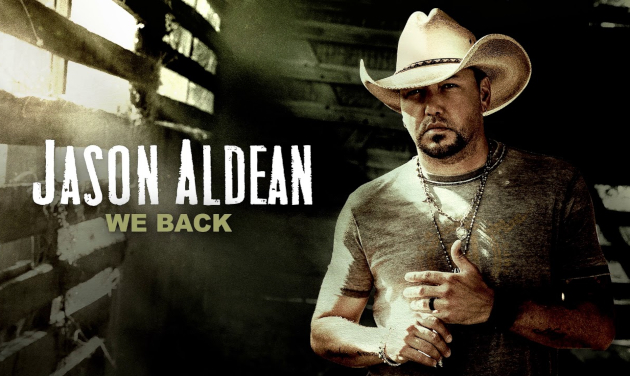 He back, and as stove-headed as ever. Jason Aldean recently took time away from volunteering his head as a battering ram for the Southern Georgia Special Tactical Infiltration Unit – Narcotics to cut a few new songs for an upcoming record lazily entitled ‘9.’ Hopefully like a feline’s lives, this will be Jason Aldean’s last. But for now, he’s making us suffer through this new lead single, “We Back.” If you think your IQ just dropped simply from staring at the title, wait until you hear this sucker.

If it was the early 90s, and Jason Aldean was opening for AC/DC or a born again Ozzy Osbourne, perhaps this mess would fly. But this is 2019, and supposed to be country music. Where is the Prince of Darkness to bite the head off a Jason Aldean when you need him? Chainsaw guitar chucks and Hells Bells minor chords introduce a song that is just another fist-pumping arena rock anthem about performing yet another fist-pumping arena rock anthem, which has become Aldean’s specialty, or crutch.

This guy is stuck in a deeper rut than an F-250 wearing street tires trying to streak across a field of Texas black gumbo newly-tilled topsoil after four inches of fresh rain. Jason Aldean’s last lead single was basically the same song called “Lights Come On” from 2016. Wait, that was two records ago? Holy shit this guy puts out a lot of bad music. Either way, it’s the same old Jason Aldean crap about booming speakers, pickup trucks, chicks in tight jeans, and bringing the party. This is the kind of song you listen to after eating Wheaties garnished with EPO hormone the morning after your latest testosterone treatment.

This isn’t music for people who like music. It’s for people who want their entertainers to affirm their lifestyle. At least Aldean’s not back rapping (at least not yet), and the hair metal drums are handled by a human. But aside from that, “We Back” has a whole bunch of nothing. The only thing this song is good for is for College GameDay to come out of commercial breaks to, making you hang your head as an actual country music fan every Saturday. Sure, “We Back” gets the blood pumping if you’re into that kind of thing. But as a country song, it’s about as handy as a football bat.

Jason Aldean has some good songs. That “Drowns The Whiskey” duet with Miranda Lambert a while back wasn’t half bad, and when he gets into material about dying farm towns and the like, it can be pretty interesting. You also hoped that maybe he would look to join the movement to more country-sounding material that many of the mainstream guys are making, or that maybe the experience at the Route 91 Harvest Festival massacre may turn him more introspective. But no dice, at least not in this song. He’s just kind of a shallow dude, and “We Back” underscores this yet again.