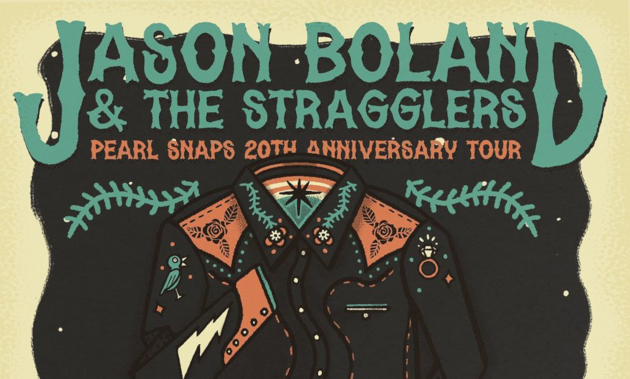 Want to feel old? Then try to wrap your head around the fact that it’s been over 20 years since Red Dirt country music legend Jason Boland released his iconic debut album Pearl Snaps. One of the founders of the Red Dirt movement and one of the most country of the lot, Jason Boland and his band The Stragglers are still going strong. But if there’s any consolation to contemplating how quickly the last two decades have flown by, it’s that Jason Boland and the Straggglers will be heading out on a 20th Anniversary Tour to celebrate the milestone with two waves of live dates, playing Pearl Snaps in its entirety, along with other Jason Boland favorites.

The “Pearl Snaps 20th Anniversary Tour” will include multiple performances at Mile 0 Fest in Key West, Florida, where Boland is set up to be tributed by his fellow Red Dirt and Texas Country performers on Friday, January 31st at the Key West Theater, as well as performances throughout the United States. It also includes a few co-headlining dates with Leftover Salmon. And don’t worry, if you don’t see a date in your neck of the woods just yet, they’re promising more dates are coming.

Along with getting to see Jason Boland and the Stragglers live, they’ve also lined up quite the impressive lineup of openers for the run. This includes select dates with songwriting maestro Adam Hood, California country artist turned rising star Jesse Daniel (keep your eye on him), Elaina Kay who released her debut album produced by Paul Cauthen this last summer, Caleb Caudle who has his own new record on the way soon, the combination of up-and-comers Kody West and Kolby Cooper at a show in Chicago, and a show with the Casey Daniels Band. More support acts for the late April dates will be added shortly.

You may be old. Hell, you can remember when people were referring to Jason Boland as an up-and-comer. But you’re not too old to get your ass to a show by The Stragglers and remember the glory days of Red Dirt.

…more dates and openers to be added