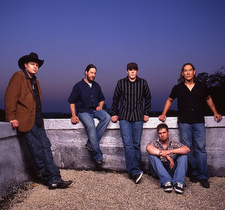 If Red Dirt spans a wide sonic palette that ranges from hard country to straight rock n’ roll—with alt-country, country rock, Southern rock, and even some country pop thrown in between—then Jason Boland is the hard-edged bookened defining Red Dirt’s country border. In other words, it is pretty difficult to be more country than Jason Boland and the Stragglers.

Jason is a true, legacy Red Dirt artist who did his time at “The Farm” near Stillwater, Oklahoma where the Red Dirt movement sprung from, rising up right beside Cody Canada, Stoney LaRue, Mike McClure and all the rest. But Boland left there not with the country rock hodgepodge sound that Red Dirt has come to be known for, but with a reaffirmation in serving country music straight, believing that the power of the story and the moan of a steel guitar or Telecaster is enough to stir the soul without having to resort to catchy rhythms or wanky guitar solos to hold people’s ears. It is with this steadfast principle that Jason Boland approached his 7th studio album, Dark & Dirty Mile.

The record immediately grips you with the opening title track and its dizzying, well-crafted verses packed with wit. That takes you into the Texas fiddle-driven, foot-shuffling 2nd song “Electric Bill,” that is a sonic treat from the very first chucks of the fiddle bow. Jason Boland understands that being hard country is not all about hard living, but about hard loving as well, and expounds on this thought in the sweet songs “Lucky I Guess” and “The Only One,” with the latter comprising one of the album’s best written songs, balancing the disenfranchisement with the direction of the world with the comfort of a loved one who understands. 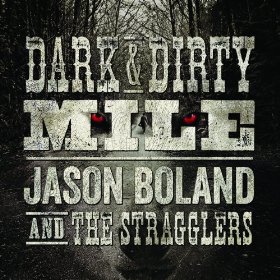 Jason tends to take the time in his albums to convey a message and reflect back, and that’s what he does in the tribute song “Ludlow” about the striking miners of southern Colorado in one of the incidents given credit for stimulating America’s labor movement. The dark and low-key “They Took It Away” is one of only two songs on Dark & Dirty Mile that Boland did not write. It traverses the history of the Red Dirt homeland and the travesties that have befallen it. If you look deep, Jason Boland and Dark & Dirty Mile are quite political, but his gift is being able to bury his message just enough below the surface so that the reactionary political attitudes that keep some from enjoying the wisdom of a good song don’t come into play. Boland doesn’t preach, he tells.

The most curious track of Dark & Dirty Mile is “Green Screen,” a decidedly straight ahead rock & roll departure for both the album and Jason Boland as a whole. It’s not just the out-front drums and dirty rock organ driving the song, it is the little rhythm stops and tambourine that take this song to something you’d expect to hear from The Departed these days instead of The Stragglers. I agree with the spirit of the approach with this song, because for all of Boland’s strengths, spice is something his albums could always use a little more of. However “Green Screen” may have a little too much cayenne to fit well in this context. For all the songs on this album though, this is the one that tends to grow on you the more you listen.

Like many Red Dirt bands, I’ve always wanted just a little more from Jason Boland. His songwriting is great, but has never risen to that Corb Lund, Chris Knight caliber. As much as old school country fans love to extoll the virtues of the traditional sound, when not textured with at least a little something more unique or fresh, the sound can be limiting. Boland & The Stragglers do touch on some unique elements, like when they add accordion to their songs, and they try something new with “Green Screen,” but Jason Boland remains more of a core country artist than one that would act as a good gateway drug for your pop country friends to transition to the real stuff.

Jason Boland & The Stragglers have benefited over the years from their consistency. Even through a potentially career-ending vocal cord rupture by Boland in 2008, the band recovered to remain one of the very top-billed, mainstay acts in Texoma Red Dirt. You know what you’re going to get from a Jason Boland show and a Jason Boland song. Dark & Dirty Mile continues on with that consistency and strength, and assures that as Red Dirt grows and ages, Jason Boland & The Stragglers will still be one of the movement’s premier acts, and one preserving the country roots in the Red Dirt legacy.