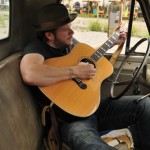 What do we mean when we say “country” music? Well take a listen to Mississippi native and Texas transplant Jason Eady‘s new album AM Country Heaven, and that should give you the strongest of all possible clues.

And what do people mean when they say “Texas” country? This album isn’t a bad example of that either. With the help from a virtual who’s who of Texas-based studio musicians, including Redd Volkaert and Earl Poole Ball from Austin’s legendary “Heybale” talent collective, and joined by steel guitar maestro Lloyd Maines, the Texas sound is all over this album. And regardless of whose name is on the front, AM Country Heaven was very much a collaborative effort between Eady and songwriter Kevin Welch.

With no mincing of the country style or mixing it with rock or punk or even taking the often gimmicky “neo-traditionalist” road, Jason Eady does his best to rage at the dying of the traditional country light by being as steadfast and straightforward with his country approach as possible. And the classic approach doesn’t just include the musicians and sonic structures, it is extended deeply into the themes and words of the songs, from the punchy country protest song “AM Country Heaven”, to the drinking and heartbreak songs that make up the body of this album.

Well Jason will, and does in AM Country Heaven unabashedly.

Where I distance from a lot of other music writers and fans who have been heralding this album since its release is in the project’s originality.

Quite a few of these songs are built around themes and lines that have been used in country many times before. For example, when Clint Black a dozen years ago delivered the line about how “…it’s enough to drive a drinking man to stop and take a think,” it seemed so fresh and inventive. In 1999, Roger Wallace put out a great album called Hillbilly Heights whose lead off song was also called “Wishful Drinking” that since has become one of Roger’s signature songs (and as was pointed out in the comments, Adam Lee also published a “Wishful Drinking” song in 2010). So when you take that same lyrical turn and song title and pose it yet again here, it just lacks a potency. Does that mean that Jason Eady stole this element? Of course not. But to the well-seasoned country music ear who over over the years has built up a tolerance to such lines, there is no cleverness left to keep you engaged. 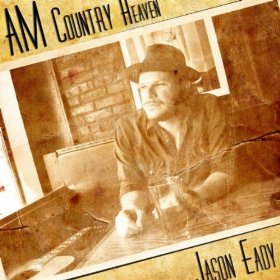 And similar things can be said said for AM Country Heaven‘s “Water Into Wine” written by Scott Copeland. The irony of using Jesus’s saintly Galilee trick to talk about partaking in the sin of drinking has been done many times before. “Man On A Mountain” is one of the best songs on the album, with its bluegrass approach and Patty Loveless‘ fantastic contribution in the duet, but how many times has this “Oh we’re lovers from two two different backgrounds, can we pull this off?” approach been done? Even the song “AM Country Heaven” one of the best selections on the CD is a song that’s been done a dozen times over the last dozen years, with Dale Watson and many others calling out Music Row’s dirty business.

Granted, not all the songs carry this burden. “Longer Walk In The Rain” is an excellent composition, maybe one of the best Eady’s ever penned. It’s not just classic country, it is a classic, period. But it’s a slow song amongst many other waltzes and ballads, and this exposes another issue with this album, which is a lack of energy or youth; the same argument made by many pop and mainstream fans that oppose classic country.

But just when I was beginning to feel burdened on how to get right with this album, I realized what Jason Eady was trying to do here. When somebody wants to make a classic country album, what do they do? They turn down the drums, they go to waltz time, they emphasize the steel guitar and fiddle, just as has been done here. But sometimes the lyrics and themes are an afterthought. Sometimes they carry a positive pop love story that’s so counter-intuitive to how classic country worked, or sometimes they over-glorifying whiskey, the devil, and cocaine, counter to country’s traditional values. Or sometimes the lyrics get hokey with “aw shucks partner” type outmoded anachronisms.

Jason Eady’s attempt on AM Country Heaven was to not rehash classic country themes in his songs, but pay them forward to a generation or an audience whose likely never heard them before. Hardcore country music fans may hear this stuff as cliche, but in a world dominated by cliche mainstream country radio, a song about wishful drinking is original to them.

In the end though I wish Jason would have stayed a little farther from such obvious themes and lines in some of the songs, and understood that in the underground and independent country world, the “hard country” approach is commonplace. Is it really a commentary on the caliber of an album when we tout how country it is, or is it a commentary on the current state of country music?

But I would never argue against this album and can’t name you a bad song on it. If you truly like country music, you should give it a long hard try because in the ideal world, Jason Eady’s AM Country Heaven would be in heavy rotation on the FM. And if it was, country music would be much better off for it.