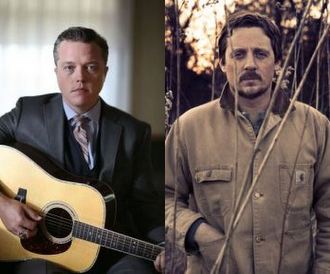 You would be hard pressed to find two hotter names in independent roots music at the moment than country revivalist Sturgill Simpson and Americana stalwart Jason Isbell. Though the duo has never done a full on tour together, they’ve shared many bills over the years, including playing sold out nights at the Country Music Mother Church in Nashville, aka The Ryman Auditorium, and both playing Willie Nelson’s 4th of July Picnic earlier this summer.

Beyond sharing bills, big rocketing career trajectories, and both employing the services of super producer Dave Cobb, the two artists appear to have a greater kinship off the stage. But for whatever reason, we’ve never seen the two men on stage together, until now.

Tuscaloosa, Alabama was treated to a ridiculous lineup on Thursday, October 15th at the Tuscaloosa Ampitheater, where Alabama-born Jason Isbell was headlining a show with Grammy-nominated Sturgill Simpson and Brandy Clark opening. Not only did the crowd get treated to one of the most amazing lineups to be assembled for a local show in recent memory, but Jason Isbell—once employed by the Drive-By Truckers for his lead guitar skills—walked out on stage during Sturgill Simpson’s set to join his band in a rendition of “Amarillo Highway” by Terry Allen.

Though the scene was Tuscaloosa, the spirit was of the Texas Panhandle and one of the greatest country piano players to ever suck air. Finally seeing these two titans of roots music on the stage together, and playing such a cool song, is something to behold.

Sturgill will be taking after Isbell and making an appearance on Austin City Limits Saturday, 10-17.