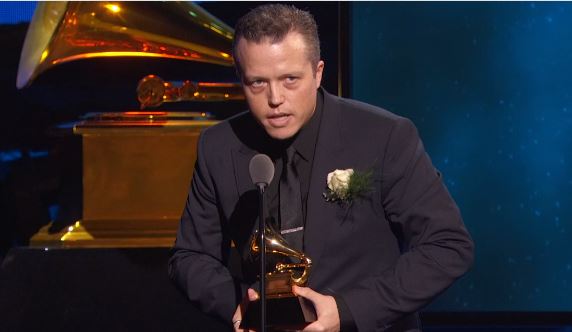 Jason Isbell now has a third and fourth Grammy Award to add to his already-decorated mantle.

The Americana stalwart won the 2018 Grammy for Best Americana Album at the 60th Annual Grammy Awards held in New York City on Sunday (1-28) during the pre-telecast ceremony that takes place before the big awards show broadcast. The award goes to his record The Nashville Sound that he shared in namesake with his long-time backing band, The 400 Unit, and that was produced by Dave Cobb. He also won for Best American Roots Song for “If We Were Vampires.”

“I’m not running for the Internet,” Isbell said as he reached the podium. “But I will say this. I feel like this particular part of the ceremony is I think joined by a lot of people who are trying to keep a certain thing alive. And for me, I’m really trying to keep the spirit of the song alive. That’s the most important thing to me about my job.”

The Grammy for The Nashville Sound adds to an already-impressive list of accolades for the record, including winning the Americana Music Award for Album of the Year, as well as the very surprising nomination for Album of the Year by the Country Music Association, or CMA.

The nominations and multiple wins speak to the continuing influence and appreciation Jason Isbell has been able to garner throughout Music City as an independent artist, not just from the Americana crowd, but from a wide swath of the music community. Along with the awards, Jason Isbell was also able to sell out an unprecedented six consecutive nights at Nashville’s historic Ryman Auditorium in 2017, and was also named a Country Music Hall of Fame Artist in Residence.

Some wondered if Isbell would be nominated for Best Country Album by the Grammy Awards, or the all-genre Album of the Year. But as artists like Isbell have grown, so has the genre of Americana from beyond just a farm system for country, but a community that can create its own superstars, and support them throughout their careers.