“Who’s Gonna Fill Their Shoes?” was the question George Jones once asked.

Well he may only have two feet, and those might be mighty big shoes to fill and there’s plenty of pairs of them laying around to boot, but Jason James isn’t afraid to try and slip his hooves into some vacated footwear, or at least make music that reminds us of the many greats who’ve passed on and whose legacies are slowly growing dim in the minds of many.

The company line coming from Music Row in Nashville these days is that nobody wants to hear old classic country music, and even if they did, they could go back and listen to the old records, so there’s no need to make new country music that sounds old. Easy to say for Florida Georgia Line and Luke Bryan, but who wants to hear them trying to match the talent of George Jones anyway? That sounds like a terrible idea. The simple truth is the majority of today’s mainstream country stars don’t have the goods, the heart, or the understanding of music to make classic country even if they wanted to.

But there’s others who do. Jason James isn’t afraid to to pen a song in a traditional style and then challenge himself to sing it with the same heart and passion as one of the old greats. Nobody will ever replace George Jones or ‘Ol Hank, but that doesn’t mean others can’t try to reach for that same level of excellence, and pay forward the traditions of country to a new era of listeners who still find value in the classic modes. This is what Jason James does, and with an almost eerie expertise at evoking the styles and sounds of the old greats. Jason performs a classic country seance for the ears with a confident ease that encompasses everything from the writing, to the singing, to the arrangement. 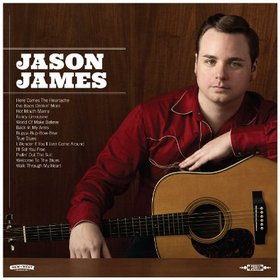 Jason James’ debut, self-titled release through New West Records was recorded in two separate settings, though you wouldn’t know this by listening to the finished product. The first sessions commenced in Austin and Houston with producer John Evans, and was bolstered by appearances from Robert Ellis (also of New West Records), and Robert’s steel guitar player Will Van Horn.

Then Jason boogied it out to Nashville where he solicited the services of producer Keith Gattis and an impressive list of veteran players, including bassist Dave Roe of Johnny Cash and Dwight Yoakam fame, fiddler Glen Duncan, and the former steel guitarist for Randy Travis, Steve Hinson. The result is not just songs that sound like classic country, but are authentic to the style because in certain cases it’s some the same players who performed on the older records.

But it’s really the singing and songwriting that is so remarkably accurate that moments in these songs are potent enough to inspire shivers. Jason James wrote most of these songs by himself, though one particular composition, “Walk Through My Heart,” was written with songwriting veterans Jim Lauderdale and Odie Blackmon—speaking to the caliber of songwriting the freshmen effort looks to achieve.

Once James had the songs on paper and the style in mind, he then delivers resoundingly in the vocal performances, which were the essential ingredient to making this debut not just another throwback retro country disc, but a showcase of talent that is singular in nature.

If anything, Jason James’ singing is a little too good, and a little too catered to the styles he’s looking to emulate as opposed to honing in on his own original voice to use universally throughout the record. You never get a bead on what the voice of Jason James himself sounds like, because like a classic country chameleon, he’s constantly changing his voice’s color.

In the opening song” Here Comes The Heartache,” Jason sounds remarkably similar to George Jones. In “True Blues,” the Texas City native sounds like Hank Williams. “Fancy Limousine” is a shot at trying to slip into the Dwight Yoakam sound. And though all of these songs are certainly enjoyable to listen to, and authentic in their own individual realms, the shape shifting ultimately begins to take away from the overall experience.

It’s not about picking one singing style and sticking to it, it’s about discovering James’ own unique singing method and using it in his music more universally to add an original component to the music. This is the way Jason can go beyond a masterful interpreter, to a bona fide original classic country voice. This is the path to filling the shoes of George Jones, Hank, and the others who loom large in the hearts of classic country fans, and will forevermore as long as there’s new generations of performers like Jason James who are willing to carry on the traditions with such tenderness, heart, and dedication.